Editor’s Note: This whiskey was provided to us as a review sample by Waterford. This in no way, per our editorial policies, influenced the final outcome of this review. It should also be noted that by clicking the buy link towards the bottom of this review our site receives a small referral payment which helps to support, but not influence, our editorial and other costs.

Mark Reynier, who helped revamp the dilapidated Bruichladdich Distillery, travelled nearly 900km to start up Waterford Distillery in Ireland. Where Bruichladdich started to touch the surface of the idea of terroir on whisky, Waterford is going the distance. The first in Waterford’s Arcadian Series is the Organic Gaia 1.1 containing uncommon barley harvests.

The Organic Gaia 1.1 is Ireland’s first organically certified whiskey. So what makes it an Arcadian Whiskey? Well,  the farms use alternative methods for all the barley grown and harvested. The Organic Gaia 1.1 uses organic, biodynamic, and heritage barley and goes back in time before the agrochemical industry.

While most of us are familiar with organic foods, biodynamic farming is often unheard of or complicated to grasp. Here in the Pacific Northwest, where I am from, there are many vineyards and wineries that use biodynamic processes. In 1924, Rudolph Steiner developed biodynamic farming. Everything in nature and on the farm is tied together. The technique gets complicated insofar as to have a specific calendar. For example, there are root days, fruit days, flower days, and leaf days.

Whisky makers are also turning to farms that grow sustainable heritage barley. While there is a lack of incentive to grow it compared to high yielding barley crops, heritage barley provides flavor. At Waterford Distillery, they are clear that yield doesn’t always offer flavor and they are seeking flavor.

Unlike the Single Farm Origin Series at Waterford, which I will review a little later, the Arcadian Series uses barley from six farms using the principles previously mentioned. Let’s see how it impacts the whisky… 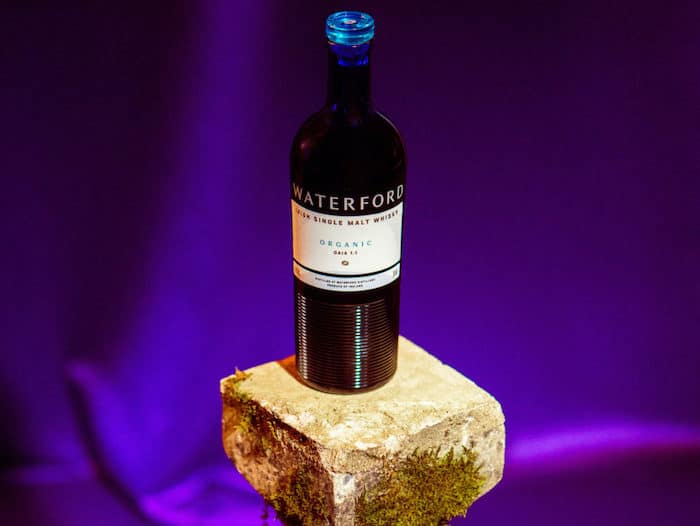 Nose: It is funky and complex. The more I nose, the stranger it gets. At first, fresh garden mint is the most noticeable. Next up, you get the malt and the yeast fighting to be up front. Nutmeg creeps through and brings out the fruitiness. The whiskey flip-flops between pastry, like a warm pear galette, and fresh baked loaves of soda bread. Salt air and porridge mingle before plum and fig arrive at the end.

Palate: It’s hot, but then again Irish whiskey always comes off hot on the tongue for me. I mostly get soot and cigar ash. Leather and grass, or hay, come through, but I find this unappealing. In fact, my initial tasting, and subsequent tastings did not go over so well as I found the whole dram off putting.

Coming back to the whiskey, all the previous notes still apply, but now more flavor is coming through. Lemongrass and lemon balm peek out. I welcome the fresh lemon zest with star anise and fresh garden mint, like Orbit Sweet Mint gum. There is very little sweetness overall. When I do pick up the sweetness, it’s like spun sugar or a touch of powdered sugar. Cocoa and coffee linger in the aftertaste.

I had to taste and taste and taste for my brain and palate to make sense of the Waterford Organic Gaia 1.1. It's vastly different, and I believe it is definitely due to the barley. It's complex and unique. While it doesn't taste like an onion, I would say it is an ogre of a whiskey. Don't just dismiss it the first time around.

My dad, who is a Glenmorangie and unpeated scotch fan, at first sip said it was good. I gave it a 3 because you may either like it or not. It's by far the worst whiskey I've ever tasted. Keep in mind that barley is supposed to have actual flavor and that high yielding, overly processed barley crops that we are used to lack bold flavor.