Waterford Distillery, located in Ireland, has at its helm one Mark Reynier. Reynier is known in the whisk(e)y world for being one of those who helped resurrect the mothballed Bruichladdich Distillery in Scotland at the end of 2000. He was instrumental there in introducing “pioneering cask finishing policies that went on to change the whisky industry” and, after Bruichladdich was sold to Rémy Cointreau for £58 million in 2012, he went on to buy the former Guinness brewery in Waterford in 2014 – transforming a state-of-the-art brewery into a modern distillery.

Reynier, given his time at Bruichladdich, is one that believes in how terroir can have an influence on the whiskey one drinks. Part of his experimentation in this regard has been in the creation of whiskey distilled from biodynamic grown barley. Also in the wheelhouse at Waterford has been the development of “an uber-provenance range of limited edition natural whiskies that explore Irish terroir one farm, once place, at a time.” The first of these has now come to market, and it is known as the Single Farm Origin series. 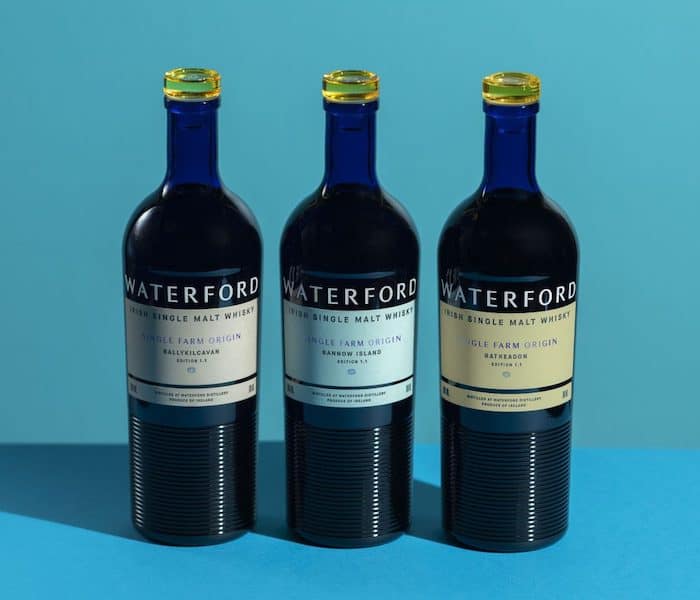 The Waterford Single Farm Origin series, according to those behind it, consists of Irish single malt whiskeys distilled from 100% Irish barley. The “first two Single Farm Origin editions use barley originating from unique corners of Ireland: Bannow Island: Edition 1.1 – distilled from barley grown by Ed Harpur on the extreme southern coast of Co. Wexford, where salt-laden Atlantic winds and sandy soils create a unique, if challenging, terroir.

“Ballykilcavan: Edition 1.1 – distilled from barley grown by David Walsh-Kemmis west of the Barrow in Co. Laois in the barley heartlands, where his fertile fields are sheltered by ancient woodland.”

The methodology Waterford is using to produce these whiskeys is meticulous. According to them “using a mash filter instead of a mash tun, minimum 120-hour fermentations, and exceptionally slow distillations, Waterford produces the most natural and respectful expressions of barley possible. Throughout the entire process, the distillery keeps track of thousands of data points.”

Interestingly, these single origin whiskeys are not the end game for Waterford. Rather, the distillery’s ultimate aim “is that these component single malts come together create the world’s most unique, complex and profound” whiskey.

“I’ve spent a lifetime in the top end of drinks industry – half in fine wine, half in single malt – and Waterford is the culmination of this rather unusual journey,” said Reynier in a prepared statement. “It’s rare one has the chance to breathe life into to such a provocative concept, one of such of precision, challenge and originality.

“For years folk have been hoodwinked on where whisky’s quality truly lies – once stills, then water, now wood. We want to shine the light on what really makes malt whisky the most complex spirit in the world, the primary source of all that extraordinary flavour: barley.

“I can safely say no stone has been left unturned. No challenge unmet. Thanks to unparalleled logistics, great teamwork, and singleminded focus we can now share our inspiration, this vision, that will one day rebalance the way we look at and enjoy this fine spirit. And this is just the beginning.”

As it stands now plans call for these whiskeys, bottled at 50% ABV and without coloring, chill filtration or additives, to price at £70, or around $85 USD. Different Single Farm Origin bottlings, equally unique, will be released to the US and other overseas markets later in the year, whilst the next bottling in the series, Single Farm Origin: Ratheadon: Edition 1.1, will follow exclusively online and from the distillery itself.

It should be noted, for the deeply curious, that each bottle features something called a TÉIREOIR code. This code, when entered at the distillery’s website, “will reveal a host of unprecedented and engaging content related to the release. Using rich photography, and drawing upon the distillery’s unrivalled digital logistics systems, drinkers will be able to explore the place, the harvest, the grower, distillation details as well as view the full spectrum of wood.”

9
Shares
3k
Views
Share on FacebookShare on TwitterGet Our Newsletter
Cheers to the Dads! Personalize a bottle of his favorite whiskey to create a modern gift for the modern man. Use code: FATHERSDAY20 for $20 off your next order of $100 or more at ReserveBar