Editor’s Note: This whiskey was provided to us as a review sample by Tatoosh. This in no way, per our editorial policies, influenced the final outcome of this review.

Let’s talk Tatoosh. This distillery opened up in 2009 by Troy Turner and Mark Simon in Seattle, Washington. The inspiration hails from Turner’s family history back in the Prohibition days when they had made and sold moonshine in the deep South. Tatoosh Bourbon is also a family recipe, resurrected from, give or take, a century ago. It is one of the few and proud whiskeys in the Northwest to source, distill, and finish their whiskey locally. Local farms provide the ingredients, with the mash bill consisting of 70% corn, 15% rye, and 15% malted barley. The barley in question comes from a field close to the distillery itself.

The bourbon is a sour mash. If you were curious, it is a process meaning that a small amount of the mash from the previous batch is incorporated in the next to help ensure consistency of the product. In regards to aging, Tatoosh is said to be more than three years old, but not by how much. As the distillate ages, the barrels are rotated every three to four weeks in order to expose the whiskey to oak as much as possible.

When it comes to accolades, Tatoosh has done pretty well.  It has won some competitions over the years, including a Gold Medal at the Beverly Hills Spirits Competition, and the Platinum Medal at the SIP Awards in 2013 and 2014. 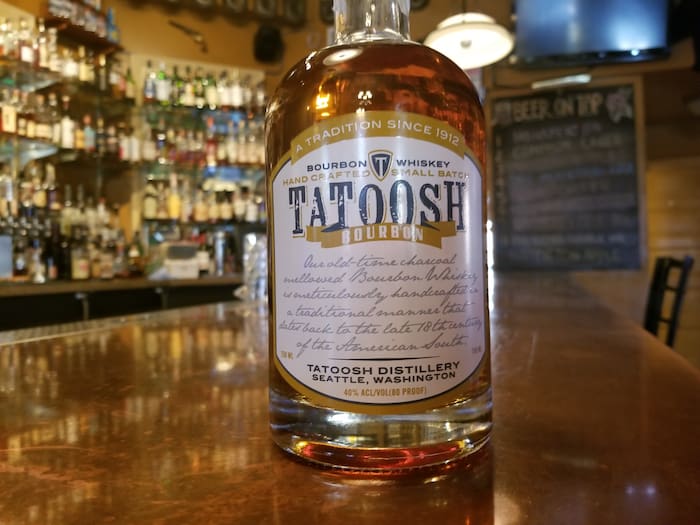 Palate: Light body, milk chocolate, a touch of oak, and finishes with vanilla.

This is an easy sipper, almost too easy. At the same time, it leaves one wanting more from the experience. Bigger flavors, possibly with a higher proof. Would certainly be curious to go to the distillery and taste straight from the barrel.

At the end of the day, Tatoosh is a touch too light to play around with other liquors in cocktails, but stands well enough on its own, neat or over ice.