Sour mash. It’s a common phrase on American whiskey bottles, but it definitely doesn’t signify that the whiskey inside is sour. Instead, it alludes to a production process that distilleries use to regulate bacterial growth and ensure continuity from batch to batch.

A “mash” in the world of whiskey refers to the mixture of grain, water, and yeast that is initially fermented to produce alcohol. Distillers are very careful to regulate the pH of their mash; if it gets too high (basic), unwanted bacterial growth can occur. 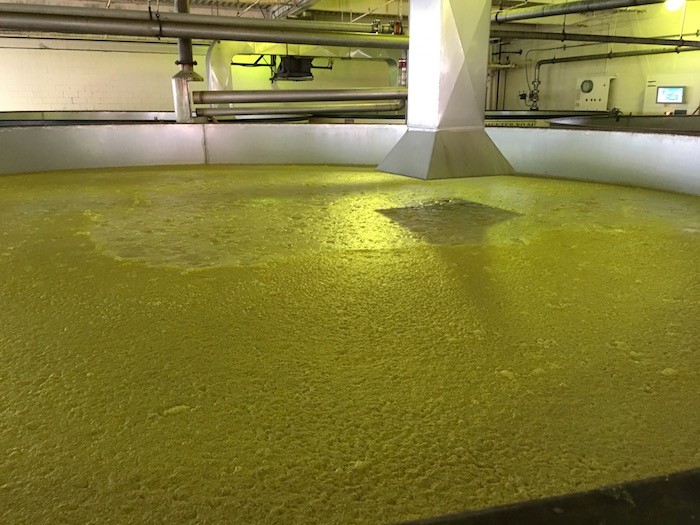 Fortunately, the distillery environment offers an abundant source of pH-lowering substance: spent mash, also called backset or stillage. This is the acidic, nutrient-rich substance that’s left behind in the still after a distillation run is complete. By adding a portion of that spent mash to their current mash (the remainder is often fed to livestock), distillers can ensure their mash pH remains within acceptable levels and ensure flavor continuity from batch to batch.

Distilleries add more backset to their current mashes than you might expect—Chuck Cowdery reports that most distilleries use a 1:3 or 1:4 ratio of backset to new mash. (In the linked story, he also outlines another interesting way that distillers could sour their mash–by letting the mash sit for a few days before distillation and allowing microorganisms to do their work.)

It’s also worth noting that virtually all major bourbon and Tennessee whiskey distillers use the sour mash technique, even though only a portion of them actively market their whiskeys as “sour mash.”

Techniques similar to the sour mash technique are also used at many Jamaican rum distilleries, only there, distillers age their backset anaerobically (sometimes seeded with organic matter like fruit) before adding it to their mashes. This aged backset is called dunder, and its aroma can be truly shocking. However, distillation manages to transform those off-putting smells into the intense, fruity esters Jamaican rum is known for.