Editor’s Note: This whiskey was provided to us as a review sample by St. George Spirits. This in no way, per our editorial policies, influenced the final outcome of this review.

Craft distilling is booming, which nobody reading this website needs to be told. The number and variety of small distillers across the United States has taken off in ways that few would have thought possible back when we were worried about Y2K causing a global computer crash.

St. George Spirits, based in Alameda, Calif., though, was around long before Y2K and likes to call itself “America’s original craft distillery.” Founded in 1982, St. George makes an impressive list of spirits – of which only a small portion are whiskeys. From absinthe to fruit brandies and green chili vodka, St. George has a history of coloring well outside the lines.

Chico-based Sierra Nevada Brewing, a little more than 100 miles from Alameda, began partnering with the distillery in the 1990s by fermenting the wash that would go on to become St. George Single Malt whiskey. Then in 2013, the two brands decided to take things a step further: St. George would distill finished barrels of Sierra Nevada Ruthless Rye beer and turn it into something new and altogether different.

Ultimately, St. George master distiller Lance Winters and head distiller and blender Dave Smith used seven barrels of Ruthless Rye and added in some of the original 1997 St. George Single Malt that had been a collaboration between the two entities, and then aged the whiskey for eight years before releasing this past December. The resulting Ruthless Malt Whiskey is a rare example of a finished full-production beer being turned into whiskey.

The novelty value alone made me eager to give it a pour. 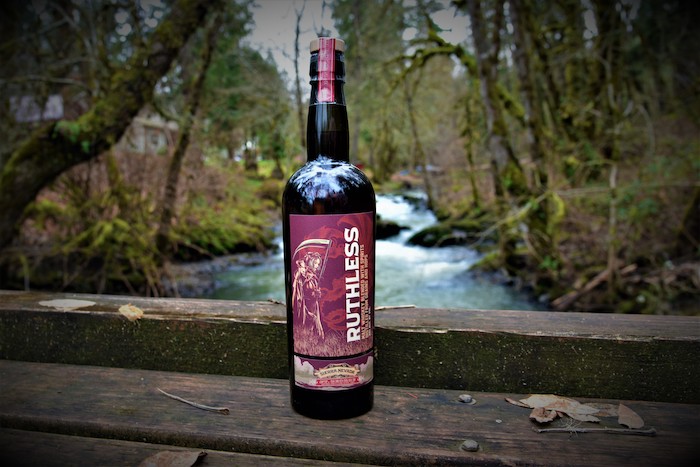 Appearance: Reddish-brown amber, with decent legs on the side of the glass.

Nose: Noses more like a cider than a whiskey. Dark chocolate, orange blossom, honeysuckle, and potpourri.

Palate: Has just the slightest hint of rye spice but none of the earthy, grassy undertones. Think marmalade, ginger snaps, and Tang orange powdered drink mix. If there’s such a thing as a Hawaiian Punch of whiskies, this might be it. (That sounds condescending, but it isn’t meant to be. This is a unique whiskey, like nothing I’ve tasted before. Whether that sounds intriguing or off-putting to you is a matter of personal preference.)

Someone who likes strong wood and oak flavors in their whiskey may not be a fan of this one. It’s crisp, clean, and shows off St. George’s roots as a self-described “eau de vie distillery” – releasing liquors that lean toward light and fruit-forward rather than oaky.

With only 1,000 bottles released in December, though, you may have trouble finding any, regardless. Sometimes wide distribution isn’t the point. The point can be, as it appears to be here, experimentation and collaboration just for the fun of trying something new. Ruthless Malt Whiskey, if nothing else, is a reminder that whiskies don’t have to exist only in the narrow range the most popular labels and styles represent.