Creating a follow up to the wildly popular Russell’s Reserve 1998 seemed like an impossible task; so how did the father-son master distillers of Wild Turkey, Jimmy and Eddie Russell, approach the challenge? For starters, Eddie began searching through over half a million barrels before narrowing it down to just a mere 25. The barrels destined to make up the second release in the vintage aged series were pulled in 2002 and placed in rickhouses at Wild Turkey’s Camp Nelson. After reaching peak maturation at 15 years – just past the bourbon sweet spot of 8 to 12 years – the barrels were emptied into a steel holding tank  before filling 3,640 750 ml bottles.

The Russell’s Reserve 2002, released in June 2018, is the first non-chill filtered, barrel proof bourbon for the brand. With limited bottles available, the Russell’s Reserve 2002 is guaranteed to be highly sought after by collectors and connoisseurs. In fact, if you are lucky enough to find a bottle at the $250 MSRP, do not hesitate to add it to your own collection as it is already going for four times the price through the secondary market. 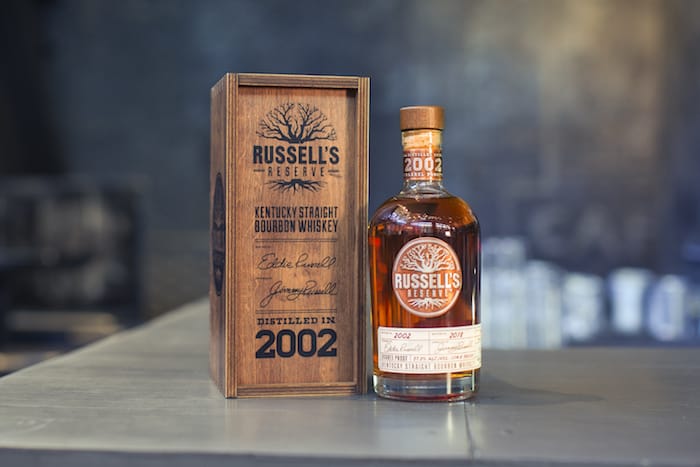 Palate: Reminds me of autumn with its crisp mouth feel and warmness. At the forefront is white pepper, oak, and cedar. Peeking through is a banana and cherry; like a candy in your grandmother’s purse. There is a slight astringency coming from the oak char, but nothing off-putting.

The Russell's Reserve 2002 is a wonderful bourbon to sip on; the complexities and warmth are a true delight to the palate. Although released in June, I'd save this bold whiskey to enjoy during the fall or winter; given the limited availability, one has to ration with each dram. The $250 price is still a bit steep for my liking, but I would snatch up a bottle around this price point.