Editor’s Note: These whiskeys were provided to us as review samples by Bardstown Bourbon Company. This in no way, per our editorial policies, influenced the final outcome of this review.

Despite being somewhat isolated in rural Bardstown, Kentucky, Bardstown Bourbon Company’s (BBCo) operations lie in a modern facility located, essentially, in the middle of a cornfield. BBCo and other distillers in the area are looking to transform the region into one of the nation’s first Napa Valley type of destination experiences in the heart of whiskey country, crafting the ultimate bourbon destination vacation for any whiskey enthusiast.

One could easily spend an entire day taking in everything there is to see at BBCo. Their facilities include everything one might want from a distillery: tasting rooms, a mini bourbon museum, aging warehouses, an acclaimed restaurant and a fantastic view of the 100 acres of land on which their operation sits. The massive operation keeps them endlessly busy, and endlessly innovating.

BBCo has only been open to the public for a few years, but before they even opened the doors they were, in a sense, already sold out of whiskey.Through their collaborative distilling program, they partner with other distillers to produce and release custom made whiskies for other labels, and their spirits were so in demand their stock was, simply, already spoken for.

Today I’m reviewing from them bourbon done in three ways: the Discovery Series #1, a blend of Kentucky whiskies aged up to 13 years; the Fusion Series #1, a blend of bourbon from Bardstown’s own stills and 11 year aged Kentucky whiskey; and finally the Collaboration Series #1, a Tennessee straight bourbon aged in Cabernet Sauvignon barrels. It was interesting to taste the differences between each expression. Although there were similarities in flavor they were all very distinct, each with a particular flavor profile and unique personality. 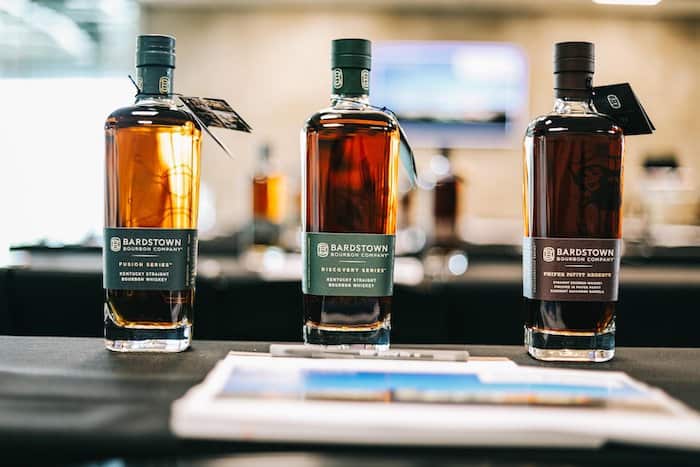 Vital Stats: The mash bill is a blend of four different whiskies, aged up to 13 years, and 75% of the blend comes from an 11-year aged high-rye bourbon. All four additions were Kentucky Straight Bourbon, made with corn, rye and malted barley. Each bottle costs around $129.99. It’s 60% ABV, 121 proof, released in select states in June, 2019.

Appearance: Lighter, reddish amber in color with delicate legs that grab onto your glass and stay there.

Nose: This bourbon smells like a barn, in the best way. Mature woody notes lift into dusty hay and grass with sweet thyme and rosemary. I feel like the terroir really comes through in the scent; it transports me directly into the heart of a Kentucky farm, with bread slowly baking in a wood-fired oven and sweet corn and ripe tomatoes growing in the backyard.

Palate: A deep underlying spice serves as the background for the flavor profile. While the front is sweet and mellow, with vanilla notes, the finish is wild and lingering. The heat intensifies over time, transforming into mature oak and leathery notes. The finish is slightly smokey and sweet, balancing out the harshness of the charred oak flavors. There are notes of licorice, orange peel, and cinnamon.

Final Thoughts: The mature and nuanced flavors from BBCo’s Discovery Series #1 stand out in a crowded field of new and emerging brands. It’s unapologetic, bold, sweet and balanced. A true Kentucky cowboy; somehow BBCo managed to capture the essence of Bluegrass State and put it in a bottle.

Vital Stats: The blend is 60% of BBCo’s two year old wheated and high rye bourbons combined with an 11 year old Kentucky bourbon, and the mash bill is made up of corn, rye, wheat and malted barley. Released in May 2019, this expression is 49.45% ABV, 98.9 proof, and would retail for $59.99 per bottle.

Appearance: The Fusion Series #1 is a light golden, straw-like color. The liquid is very thin, with almost no legs.

Nose: At first, a little astringent. Once it opens up, the smell is light, fresh and smells like a warm, dusty cornfield. Wheatgrass and caramel, with light notes of citrus fruit also come and go.

Palate: Mixing younger whiskey with older, more mature whiskey can often create interesting and complex flavor profiles, as is the case with Bardstown’s Fusion Series #1. The wheated whiskey makes the mouthfeel silky and graceful, while the high-rye blends give it a subtle spicy backbone. The front has notes of buttered popcorn, caramel and toasted marshmallows, banana, leather. The combination of new and mature flavors are light and fresh.

Final Thoughts: This expression of Kentucky Straight Bourbon is a definite departure from their Discover Series #1. The lighter flavor profile is more toned-down, but still distinctly bourbon. The charred leather flavor was a little intense, and I wish there was a little more balance between the light and heavy flavors, but the younger whiskey still stands up to its 11-year aged counterpart.

Appearance: The color is a dark red, mahogany color. The liquid is thin, not very sticky with thin legs.

Nose: The nose is sweet, with notes of grape, peach, sweet corn and oak. The wine-soaked smell overpowered the bourbon a little bit in this case, masking the nuances of the scent.

Palate: The front is hot and spicy, with notes of cinnamon and chocolate malt with whipped cream and a cherry on top. Plums and blackberry lead the charge into the leathery, oaky finish. The tannins and heat really come through in the front, but the sweetness on the finish is mouth-watering and chocolatey. Caramel, vanilla, figs and other dark fruit make this expression feel decadent, like a dessert wine.

Final Thoughts: I would pair this whiskey with a piece of chocolate, or a fire-grilled steak. The bold flavors are very reminiscent of red wine, and the bourbon provides a bold foundation to build upon. At times the Cabernet Sauvignon is the only thing I can taste, and I wish there was slightly less wine flavor and a little more bourbon flavors to balance it out.