Editor’s Note: This whiskey was provided to us as a review sample by Republic Restoratives. This in no way, per our editorial policies, influenced the final outcome of this review. It should also be noted that by clicking the buy link towards the bottom of this review our site receives a small referral payment which helps to support, but not influence, our editorial and other costs.

Republic Restoratives Distillery, located in Washington, DC, is a women-owned spirit house with a political message. Founded by former congressional chief of staff, Pia Carusone, and childhood friend Rachel Gardner, this distillery takes the American tradition of mixing booze and politics to new levels. Their products include Civic Vodka, along with Rodham Rye and MADAM Whiskey, which honor political powerhouses Hillary Clinton and Kamala Harris, respectively. The distillery, which opened its doors in 2016, has emerged a natural gathering space for the democratic elite in the nation’s capital.

“We’ve become something of an event space which has been really fun for me because my worlds are overlapping,” explained Carusone in an interview. “We had the mayor’s birthday party here a few years ago. The DCCC, the Democratic House committee that helps everybody get elected, had their holiday party here last year. We’ve had a number of fundraisers for Senators and members of Congress. Planned Parenthood, HRC, they’ve all been here. We just had wedding for two former Obama folks and the Obamas themselves came to the distillery.”

This whiskey is made from 100 barrels of identical rye separated into two groups. The first 24 barrels were aged in DC in Kelvin Cooperage barrels. The other 76 were sent to Kentucky to age in Independent Stave Company barrels. Each group aged for five years before being bottled at 100 proof and stamped with a barrel number. The first 24 barrels are the first to be released with barrels 25-100 being saved for a later date.

The distillery suggests picking up a bottle of each to taste the difference which they claim to be astounding. The producers state, “Both aging conditions produced a delicious whiskey, but they are fraternal twins at best!” Purpose Rye sells for $69 per 750 ml bottle. 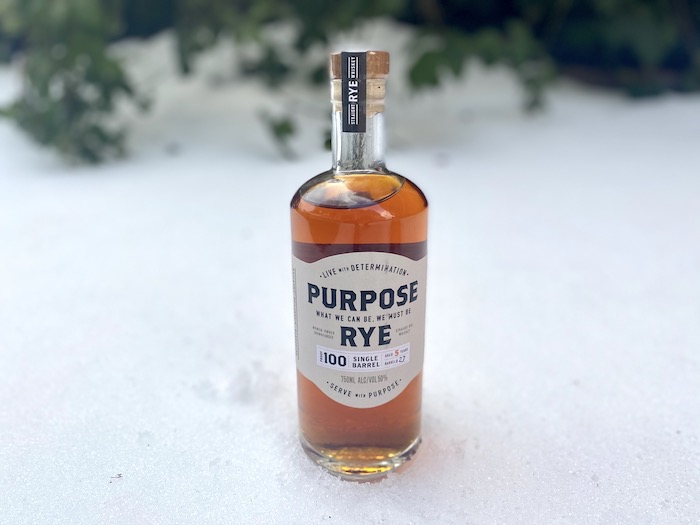 Appearance: This whiskey is tawny and relatively transparent allowing light to shine through the glass.

Nose: The nose is sweet and spicy with marshmallow cream, brown sugar and cinnamon sticks. There are pronounced fruit notes of apricot and cherry pie.

Palate: The front palate bursts with black pepper, nutmeg and cocoa powder followed by a mellowing of oolong tea and a lengthy finish reminiscent of a red hot candy melting in the mouth.

This isn’t the most complex rye whiskey. However, what it lacks in overall complexity and flavor development it makes up for in the depth of the flavors present. It’s smooth and straight forward. This is very much what I would consider a rye lovers drink. It doesn’t mess about and hits all the necessary tasting notes to make it an acceptable sipper. Rich spices are balanced with hints of sweetness and the finish will leave you feeling warm inside. If I’m ever in DC I will definitely drop in to Republic Restoratives for a glass of politically correct whiskey.