Editor’s Note: This whiskey was provided to us as a review sample by MGP. This in no way, per our editorial policies, influenced the final outcome of this review. It should also be noted that by clicking the buy link towards the bottom of this review our site receives a small referral payment which helps to support, but not influence, our editorial and other costs.

What can we say about Remus that we haven’t said before? Back in 2017, we first wrote about Midwest Grain Products (MGP’s) new label, George Remus Bourbon. MGP, located in Indiana, produces select spirits sourced for brands you will likely recognize: For example, Angel’s Envy, Bulleit, George Dickel, James E. Pepper, and Templeton. I also got to taste the Series IV last year, which was a bright spot for me in sad and scary 2020.

And earlier this year, we wrote about the upcoming Remus Repeal Reserve Series V Straight Bourbon Whiskey as well as MGP’s acquisition of Luxco; now it looks like Luxco is managing the MGP-developed brands like Remus. It’s the first release of Remus under Luxco, according to Go Bourbon. The Series V is (you guessed it) the fifth edition of the award-winning Remus Repeal Reserve Bourbon collection. It was produced to commemorate the repeal of Prohibition in 1933. 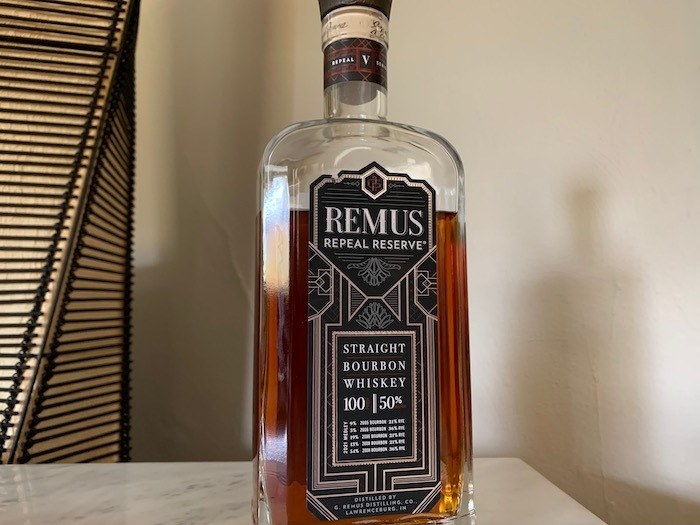 Vital stats: 100 proof; about $90; distilled by MGP in Lawrenceburg, Indiana; see above for mash bill.

Appearance: Reddish in the bottle and rusty in the Glencairn. Pinkish undertones, not super-bright. A muted bronze.

Nose: This is desserty! Rich toffee, marshmallow. Sweet. Not overpowering. Bing cherries and cherry ice cream. Pleasant and mild: A friend tasting with me also remarked that it smelled like a sheaf of fresh paper. (Remember manilla paper that we thought was called vanilla paper when we first heard the word? Just me?)

Palate: Once again, MGP/Luxco knows their shit. Even the stopper uncorks with the most satisfying of pops. This is smooth. A touch of cinnamon at the end. We tasted this in summer—obviously—and I think it would be a great autumnal whiskey. (It’s scheduled to release in September, which: perfect.) It tastes like a bourbon should. It checks all the boxes. It is not weird or offbeat. It’s dependable and well-made, like the bourbon version of a daily driver. (Do not drink and drive!) Like a good pen, it’s a solid example of a Thing, and this is a solid example of a Bourbon.

My friend put it well: Classic experience, from stopper to spirit.