Editor’s Note: This whiskey was provided to us as a review sample by Ransom Wine & Spirits. This in no way, per our editorial policies, influenced the final outcome of this review. It should also be noted that by clicking the buy link towards the bottom of this review our site receives a small referral payment which helps to support, but not influence, our editorial and other costs.

Ransom Wine & Spirits was left in the capable hands of Great Oregon Wine Co & Distillery when founder Tad Seestedt retired in 2020. Since 1997, Ransom has provided the Pacific Northwest with whiskeys, gin, and grappa. However, the core lineup has never included a bourbon until now. The first batch of Ransom Bourbon is a blend of whiskeys from Oregon and Indiana, but Great Oregon Wine Co & Distillery vows to eventually make it a fully Oregon-made product.

Ransom Bourbon is a four-grain bourbon. The mash bill includes over sixty percent corn and a mix of rye, wheat, and malted barley for the rest. The part that is Oregon distilled is made in Ransom’s hand-hammered, French alembic pot still that sits over direct fire. While it is labor intensive to hand-select the best cuts, I think it adds to the old world charm.

Master Distiller Matt Cechovic wanted to bring something new to the whiskey scene in Oregon. Many distilleries here either stick to clear spirits or craft American single malts. At Ransom, it is all about patience, which is why it took 25 years for them to make a bourbon. Behind the scenes, it can take up sixteen hours for a single distillation run in their alembic pot still.

If you have had Ransom’s WhipperSnapper or their Rye, Barley, Wheat Whiskey, expect Ransom Bourbon to show you another side of the distillery. Since Ransom started in wine, the perfect use for their empty wine barrels was to age their whiskeys. The bourbon, on the other hand, follows the new charred oak requirement. 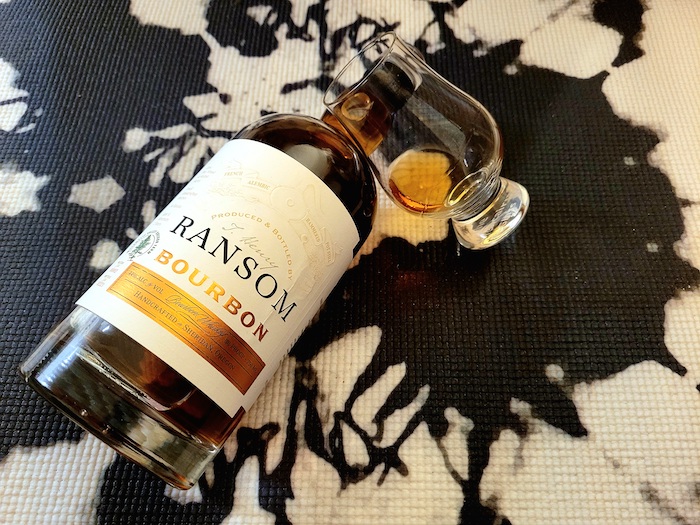 Palate: Oak and tobacco touch the palate first. The mouthfeel is silky. Orange zest provides a brightness while red cherry remains steady. Nutmeg and candied hazelnut fill out the middle of the dram. It is not a sweet bourbon by any means, and it mellows out easily. The finish is a little bitter and dry. Overall, it tastes familiar but new at the same time.

Ransom Bourbon tastes familiar but is completely new. For me, it is a refreshing step away from Ransom’s wine barrel aged spirits. The nose and palate are both bold yet balanced. The mouthfeel is incredible and the spiciness is just the right punch.