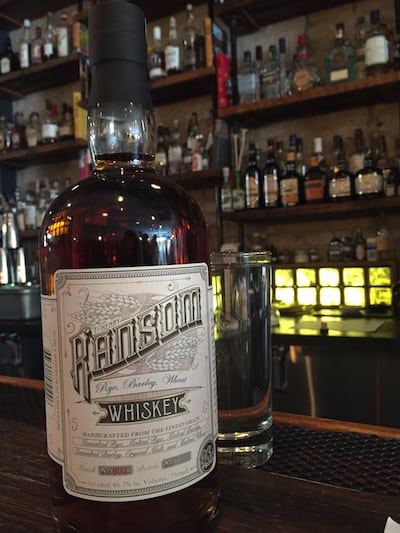 You know those people who have multiple, excellent talents? Who excel at everything they try from the get-go? And as much as you’d like to cast jealous aspersions, you’re glad to have made their acquaintance, and even count yourself lucky to have them as friends? Well, my friends, there’s a whiskey that fits this bill.

We have previously written about Ransom Wines & Spirits when we reviewed their heart-of-hearts Whippersnapper Whiskey and their retro take on Irish whisky with The Emerald 1856. Well, now they may just be on their way to a whiskey version of the EGOT based on their latest release, Ransom Rye, Barley, Wheat Whiskey. (And thanks, Ransom, for using the Oxford comma.)

Ransom’s name refers to founder Tad Seestedt’s debt to start the business in 1997 with a handful of credit cards and his life savings. At first, the distillery made grappa, eau de vie and brandy, then in 1999, moved toward making small-batch wines. In 2007, Ransom began producing spirits—gin, vodka and whiskey—and in 2010 added vermouth to the mix. In 2008 the winery and distillery moved in together with the purchase of a 40-acre farm in Sheridan, Oregon. The farm has been certified organic since 2011.

Ransom’s Rye, Barley, Wheat Whiskey, which we previewed recently when it debuted in New York, isn’t just made of the three grains. It’s actually made of six: unmalted rye, malted rye, malted two-row barley, un-malted Ransom estate-grown six-row barley, crystal malted barley, and malted wheat. It is pot-distilled in alembic copper stills, and 24 percent redistilled from whiskey originally column distilled in Lawrenceburg. It is aged in used French Oak wine barrels (which formerly held pinot noir) for a minimum of two years, and it clocks in at 93.4 proof.

Palate: That foresty feel carries through on the palate. It does start pretty hot, but finishes smooth, with a dryness of grape skins. In fact, it tastes like a very dry red wine that has whiskey in it. There is a chalkiness that doesn’t exist in the mouthfeel, but does so on the palate. The mix of grains, that kind of dustiness of crunchy cereal comes through.It’s quite curious and gratifying.

I like this very much, It’s not your typical whiskey. It’s unusual, but accessible, fun, and easy to drink. It’s a fine mix, well-crafted by a team that obviously cares deeply about what they do.