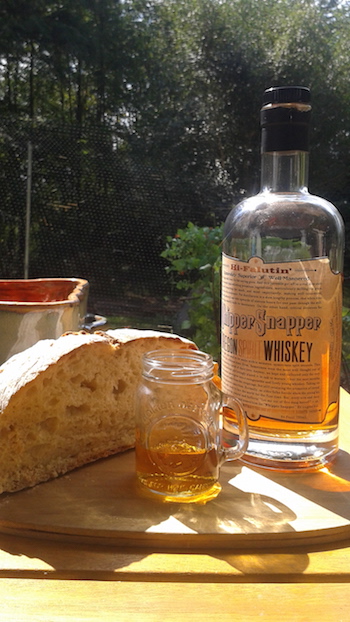 For anyone who has spent any time in the state, it is clear that Oregon is a free-thinking part of the world.  With the independent spirit of New Hampshire, combined with the friendly chill of San Francisco, Oregon has a unique character that comes out quite clearly in its home grown distilleries.

Ransom Spirits is one such as example, and in this review we are checking out their WhipperSnapper Oregon Spirit Whiskey.  Unashamed that the 63% corn in their mash bill arrives as white dog straight from Kentucky, they also are proud to source Pacific Northwest grown barley (some from their own farm) and rye for the remainder (at 16% and 21% respectively.)

Ransom began its ventures in distilling in 1997, expanding to grain-based spirits in 2007.  With such a relatively long history of successful production, it is refreshing their whiskey is not plagued by the age ambiguity that clouds other distillers’ products.

The Whipper Snapper is a blend of very tight heart cuts from eight batches, aged between six months and two years, with an average age of one year.  According to their website, “aging takes place in a variety of barrels, including used French coopered pinot noir barrels, new American coopered whiskey barrels, and used American whiskey barrels.”

With a recipe like this, there is an alluring potential for complexity.  Self-described as not a bourbon and not a single malt, but with characteristics of both, there’s just one way to define this whiskey: in the glass which, by the way, showcases this whiskey as having a color that is true apricot gold with light legs.

The youth of the spirit is apparent on the nose, with turpentine and tobacco fading into dried grass and lemon. On the palate, the rye punches through alcohol burn for a forward volley of cinnamon and biscuits, quickly returned by the not too sweet roundness of malt and a trail of agave syrup.

The finish is short and dominated by a return to grain and fresh wood. This is a lighter whiskey, self-proclaimed young and lively, that would pair well with classic picnic fare. A good lunch whiskey, I paired this with a rustic loaf, just picked tomatoes and aged Havarti cheese.

I give the Ransom Spirits WhipperSnapper Oregon Spirit Whiskey a score of 86 points. You can find it online for sale through a range of retailers for over $30 a bottle on average.