Editor’s Note: This whiskey was provided to us as a review sample by Rabbit Hole Distillery. This in no way, per our editorial policies, influenced the final outcome of this review.

Back in September we reported on the new straight bourbon that Kentucky’s Rabbit Hole Distillery was putting out: Rabbit Hole Heigold High Rye Straight Bourbon. Rabbit Hole, which was acquired by Pernod last year, was founded by Iranian-born Kaveh Zamanian; while living in Chicago, Zamanian met his wife, Heather, a Louisville native who introduced him to bourbon. As he ventured into learning more about both, he went down what the site calls “a rabbit hole he may never have dared alone.”

The Rabbit Hole Heigold High Rye Straight Bourbon is similar to the others in that it’s named for Lousiville influencer-types of the day. Heigold refers to a 19th century German immigrant, a stonemason named Christian Heigold, who adorned his local mansion with carvings to honor American icons. And a recent Whiskey Advocate article features a quote from Zamanian on how he can relate to that kind of attitude: “I relate to that spirit of patriotism and what America signifies and stands for in terms of opportunity and possibility.”

This whiskey is a high-rye blend of 70 percent corn, 25 percent malted rye, and 5 percent malted barley. The bourbon is made with “a proprietary cooking process” involving a custom 24-inch copper column still from the renowned (and neighbor) Vendome Copper and Brass Works before being distilled at the distillery. After that, it waits in #3 wood-fired, toasted and charred new American Oak barrels at an entry proof of 110 and allowed to age for just under four years before being bottled at 95 proof. 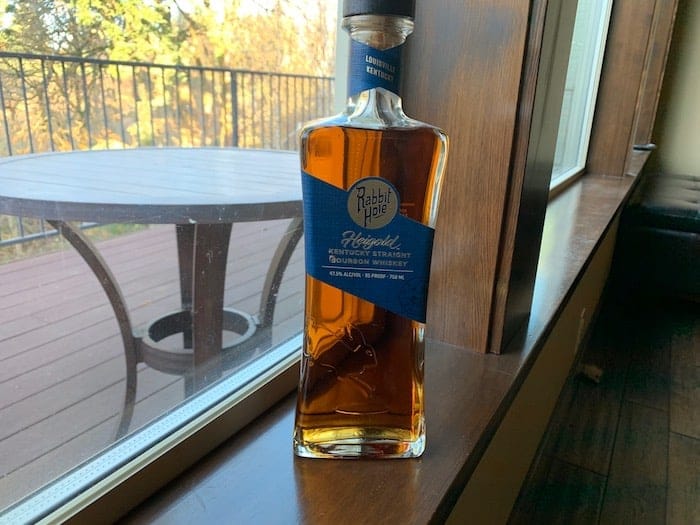 Appearance: Here’s another one in which the color is far, far deeper in the bottle than the glass. I always expect a change but this one is marked. I’m also seeing a bluish-green tinge to the otherwise chestnut color, and I’m trying not to attribute it to the color of the label.

Nose: Definite butterscotch, but the high-quality kind, not the ones in the neon yellow wrappers at midscale restaurants. Also, cinnamon and ginger. There’s Nilla wafers. And just-unwrapped Juicyfruit gum. It’s gonna move ya!

Palate I really, really like this. It tastes like liquid brown sugar. And cinnamon toast. Like just that pleasantly satisfying energy of a good solid bourbon. The kind of satisfying like when you order a piece of coffee cake and there’s a thick layer of topping on it that totally covers the springy, buttery cake underneath.

All these yummy things in a yummy bourbon. There’s a slight burn of it being high-proof but it goes down very, very easily. There’s a sort of sparkly ginger quality to it.

I thoroughly enjoyed this. Now I want to try their others. I could see myself sipping this neat anytime. I’m not even sure I would put this in a drink: I like it too much on its own. There’s something very purely bourbon about this, like the essence of bourbon.

You could give this to someone who doesn’t know much about or taste a lot of bourbon, but you could also give it to a well-seasoned whiskey drinker--and both those folks would get a lot out of this. I had a hard time limiting myself to just a taste.