It was dark, rainy and the coffee shop had closed hours earlier. This, though, was a special occasion. So on a recent Saturday night, owner Kevin Bates let us inside the building and locked us in to discuss, debate and drink whiskey.

Kevin owns a pair of coffee shops in suburban Portland, Ore., and keeps a lovingly curated wall of whiskies behind the counter alongside signs advertising bungalow blend and scones. Before I ever met Kevin, I recognized that someone at the shop was a whiskey aficionado. Not only is it uncommon to have a whiskey wall at a coffee shop, but I regularly discovered labels there that I had on my personal wish list.

In this case, I asked Kevin to join me in opening a bottle that’s on his personal wish list: Michter’s 25-year-old bourbon.

In truth, the Michter’s 25 is probably on the wish list of most bourbon drinkers – or should be. It’s been three years since Michter’s released one, and that was the first time since 2008. If that’s not enough to convince you this is a rare whiskey, the price point surely will. Michter’s says the MSRP on the new, limited release is $1,000, but you’re more likely to find it on secondary markets for between $6,000 and $9,000 a bottle.

This is a unicorn bottle – the kind enthusiasts spend years lusting after and dreaming they might find in some magical (and affordable) corner of the whiskey world. It’s as likely to go to a collector as someone who wants to drink it, or to end up at a luxury bar most of us will never have the opportunity to experience.

The challenge as a reviewer is tasting the bourbon on its merits alone, without being swayed by the price tag. Which brings us to late night at the coffee shop, and why I asked Kevin to join me for the first pour. I was eager to check my reaction against someone else’s, to talk it over with a fellow lover of bourbon and to make sure I was focused on the right things when I tasted it subsequently. (I pour any whiskey three times, on separate days, before writing a review.)

Might as well cut to the chase. Kevin and I ultimately agreed the Michter’s 25 is a truly fantastic whiskey, possibly the best either of us had ever tasted. But it took us a while to get there, and we warmed up our palates with a couple of other age-statement bourbons while we spent two hours talking, among other things, about the explosion of whiskey’s popularity and what that has done to the global marketplace.

As we talked, we poured Old Fitzgerald 13-year-old Bottled in Bond bourbon and Orphan Barrel Rhetoric 24-year-old bourbon, a treasure from the Stitzel-Weller warehouse. Both are nice whiskies, with impressive age statements of their own. Here’s the thing: Each tasted like a watery, pale imitation of bourbon next to the Michter’s. That is in no way meant to demean Old Fitz or the Orphan Barrel release. They’re wonderful. But the Michter’s is something whiskey drinkers are fortunate to ever stumble across – a bottle they’ll remember forever. Greatness in the glass.

I’ll leave aside the question of whether this bourbon, or any bourbon, is worth the price tag. What I will say is that if you have a chance to drink Michter’s 25, you should take it. 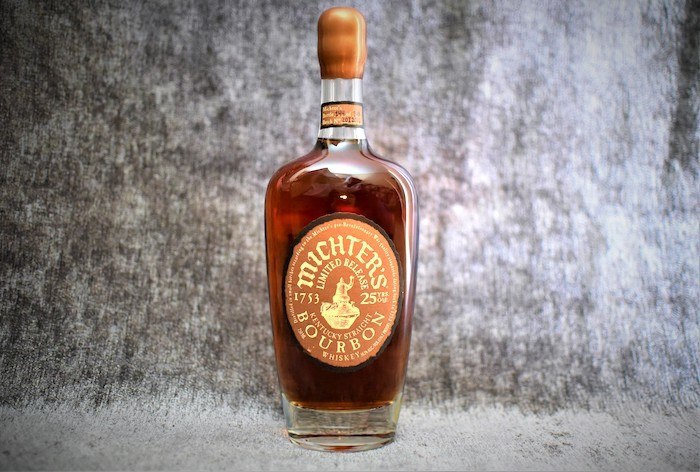 Appearance: Deep amber. Swirling it in a Glencairn Glass leaves thick legs up the sides, suggesting a whiskey with substantial mouthfeel.

Nose: Graham crackers; vanilla beans; a hint of fresh ginger. It’s warm, but – given its alcohol content – not particularly boozy.

Palate: The legs we saw when swirling it in the glass were not misleading – this is a bourbon that’s both sumptuous and silky. It’s almost like taking a bite of something rather than drinking it. Layer by layer, different flavors materialize. The wood essence comes first, which isn’t surprising for a 25-year-old bourbon: Lightly buttered toast, pecan pie bars and vanilla cake with a brown-sugar glaze. Later, almond brittle makes an appearance, along with an undercurrent of spiced apples and cinnamon. It’s a rich combination of flavors, but it comes across as balanced rather than cloying.

The finish is remarkably long. It starts spicy, holds on for an extended period of time and ends, finally, with a dollop of honey. Each time as it faded, I found myself tipping the Glencairn and hoping to find any last, additional drops.

I’ve read and been told many times that bourbon fails to improve once you’re past (depending upon who is doing the telling) 12 or 15 or 20 years in the barrel. Unlike Scotch, bourbon is aged in new American oak. Too much time in virgin oak, the theory goes, and the wood will overwhelm the grains and leave you with a whiskey past its prime. That may well be true in many, or even most, cases. It’s also true that scarcity alone can be responsible for the exorbitant price tags given to older, age-statement whiskies like this one. Michter’s released a total of 348 bottles of this year’s 25-year-old bourbon (the one I tasted was bottle no. 144), which means there is a lot of competition for a small amount of whiskey.

Without denying those things in the aggregate, I’m here to tell you this particular release is a whiskey lover’s dream dram. Apparently in the right hands, with the right juice aging in the right barrels under the right conditions, a bourbon can continue to improve for two and a half decades. Bottom line: It’s hard for me to imagine a bourbon more complex, more interesting or more satisfying.