Whiskey Review Round Up: Orphan Barrel Rhetoric 23 and 24 Yr Bourbons

What whiskey lover doesn’t enjoy a tall tale to get into the spirit of things? Marketing is everything when it comes to the world of whiskey, so promoting something as “lost” or “forgotten,” while not always necessarily factual, does definitely peak the interests of potential customers. Diageo, which sits on a plethora of whiskey housed in the historic Stitzel-Weller aging warehouses in Kentucky, would seem to be one that has a good grip on managing inventory despite making claims of lost barrels.

Launching one-off, rare whiskies through the brand Orphan Barrel ensures these barrels make it to the homes of thirsty whiskey lovers. One example of this the Rhetoric series. It starts with a 20-year-old aged Kentucky Straight Bourbon and will end with a 25-year-old in the series; meaning only one more bottle left to be released. Once these whiskies are gone, they are gone for good.

The Orphan Barrel Rhetoric 20, 21, 22, 23, 24, and to be released 25 is presented as a case study on how oak barrels affect the same bourbon. When it comes to aging bourbon, anything past 12 years has the potential to hit a wall in flavor; a wood wall. New American oak and a hot climate imparts that wood flavor at a much quicker rate than a second fill cask aged in a cooler climate. I tend to ignore age statements on most whiskies, but I am very wary of long aged bourbons because I do not like wood to be the sole flavor. 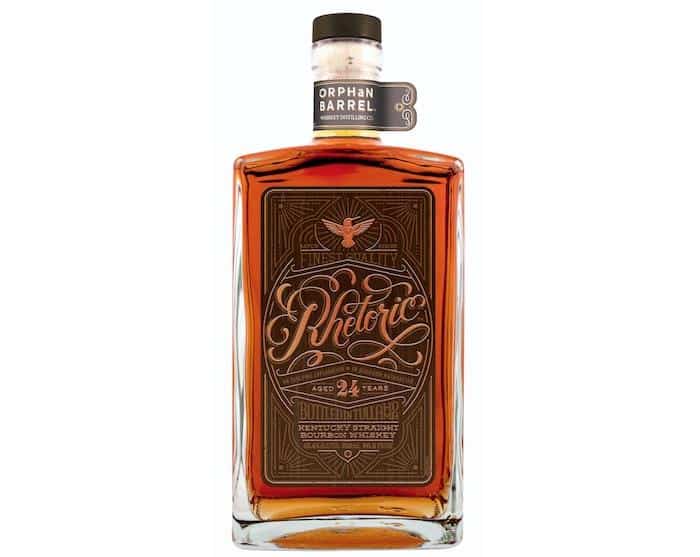 Nose: Cocoa leads the nose on this one. There’s a slightly tangy bit of nail varnish remover airing about it; normally I wouldn’t be excited about this, but it’s fitting. Heavy on the fruit notes; cherry and apple standing out the most.

Palate: Short-lived. Slightly hot due to proof. The sweet caramel and fruit from the nose, is barely noticeable on the palate. Stale oak overpowers and softens any flavor you want to taste; imagine a dried up cigar box.

Final Thoughts: Not very impressed as the flavor just disappears as fast as you sip it. The afterglow is nice and warming; it sits with you awhile. I expected a lot of oak and that’s exactly what I got, however, I do not like it as the only aftertaste. If you like to chew on a toothpick after dinner, then the Orphan Barrel Rhetoric 23 is for you.

Nose: I had to make sure there wasn’t any mint chewing gum nearby because I was caught off guard by wintergreen, or spearmint, giving a cooling sensation while nosing. That mintiness fades into baby powder before unveiling the heavy vanilla and pear.

Palate: Sweet butterscotch and cherry come through. Tastes a tad grassy. There is an essence of pear and apple, but it is all masked by oak.

Final Thoughts: Preferred over the Orphan Barrel Rhetoric 23, but still lacking in wow-factor. You can at least taste more than just oak, and enjoy the flavor longer. I wish there was more offered on the palate since the abundance of aromas is misleading. I enjoyed this one, and new characteristics develop as it breathes.