The Michter’s brand has some incredibly old stocks of American whiskey in its Kentucky aging warehouses and only on occasion does its distilling team, led by master distiller Dan McKee, determine it is time for a new bottling run from this limited inventory. One such offering is the distillery’s 25 year old bourbon, which is now getting a 2020 release.

The new Michter’s 25 Year Bourbon (2020), according to those behind it, was lasted bottled in 2017. With regards to this release it was noted by McKee that “when I tasted these particular 25 year barrels, I was thrilled about the quality.” 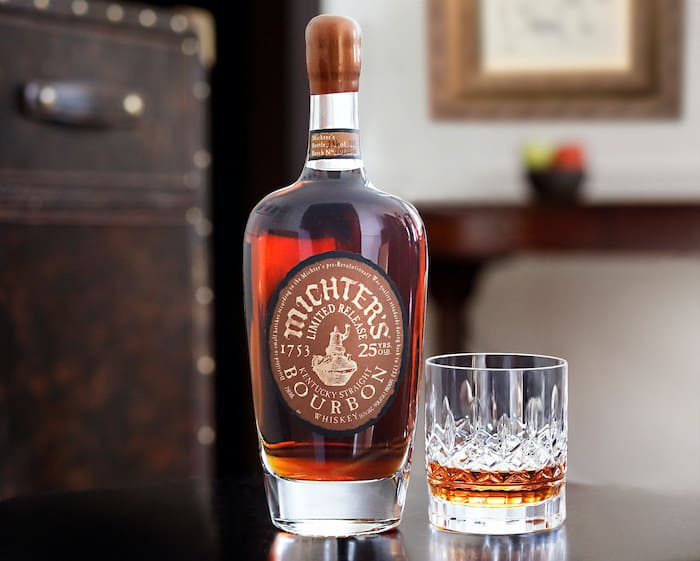 “The bourbon that has been selected for this release by Dan McKee and our Master of Maturation Andrea Wilson is truly extraordinary,” said Michter’s President Joseph J. Magliocco in a prepared statement.

“A hallmark of our older whiskeys is that they have beautifully complex character while not being overly oaked,” added Wilson.

The proof of this 2020 release is 116.2, and it is set to price around $1,000 for a 750 ml bottle. Limited official tasting notes for this 25 year old bourbon aged in fire-charred, new American white oak barrels indicate “complex whiskey, great mouthfeel. A symphony of flavors plays at different points on the palate with molasses, holiday spice, chocolate, smoke roasted nuts, dried fruit, melted butter and vanilla providing the highlights.”

Looking back to the 2017 release, this particular Michter’s bourbon is indeed a rare animal as, prior to that previous year, it last was offered at retail in 2008. The pricing three years ago was also slightly less at $800 per 750 ml bottle. Also, as we noted in the 2017 release story, it was a very limited offering of just a few hundred bottles, and our guess is the 2020 one is the same.

It will be interesting as well to see if the distillery decides now is the time for a 25 year rye re-release also.