If you’ve ever read a guide to tasting whiskey, you’ve likely come across the notion that you’re supposed to give your dram a swirl and look at the so-called “legs,” or drips, that form on the sides of the glass. We’ve already covered the topic of swirling in another post, but what exactly are those legs, and what can they tell us about a whiskey? It turns out this is a surprisingly controversial and widely misunderstood topic, not just in the whiskey world, but also among enclaves of oenophiles and rum drinkers.

Legs, sometimes called tears, have to do with the surprisingly complicated interaction between water and ethanol molecules, which are the main ingredients in whiskey.

The second piece is evaporation: ethanol evaporates faster than water. 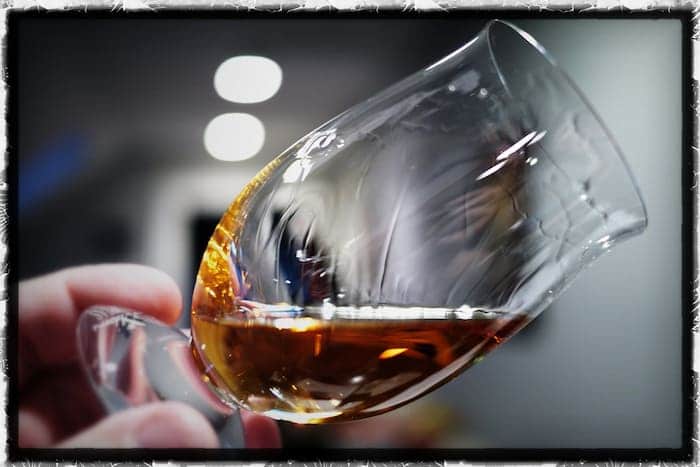 In the bottle, water and ethanol are mixed more or less homogeneously, hence no Marangoni effect.  But in a glass, which is open to the air, evaporation happens. And since ethanol evaporates faster than water, the thin layer of whiskey on the sides of a swirled glass is extra-watery. The Marangoni effect means that water molecules from the bulk of the liquid creep up the sides of the glass, since they want to stick to the other water molecules. The water accumulates at the top, where gravity eventually causes it to drip down in little watery rivulets. You can see a visual version of this in a glass of wine here.

To confirm this for yourself, here’s a fun experiment you can do, first described by James Thomson (incidentally, the elder brother of Lord Kelvin, for whom the kelvin scale is named) in 1855: pick up a sealed, partially-full bottle of whiskey and shake it around. No beading will occur on the inside of the bottle, no matter how long or hard you swirl it, because the air inside the bottle is saturated with ethanol vapor and no evaporation is happening. Now, take the cork out, and swirl the bottle around a little more. As the air in the bottle mixes with the air outside, the alcohol will start to evaporate and you’ll see legs appear on the glass. Cool!

Now that we know why legs form, what can they tell us?

Things get, weirdly, a little controversial here. Conventional wisdom, as well as a lot of whiskey experts, hold that fat, slow-moving legs indicate body and texture. On the other hand, there are plenty of other experts out there who say that’s a myth.

Everyone agrees on one thing: alcohol content is the single biggest factor. Give a glass of Bacardi 151 a swirl, and you’ll wait all day for the tiny beads that form to drip all the way down. Wine legs, on the other hand, drip quite quickly. That makes perfect sense, when you keep in mind that what you’re seeing is water accumulating—there’s not much water to speak of in really high-proof booze, whereas wine is mostly water.

And while alcohol content certainly affects texture, it’s not the only factor, or even the primary one. Far more important is the amount of wood tannins in a whiskey. The theory that slow-moving legs indicate more texture, then, is a claim that more tannins, or perhaps more dissolved congeners generally, cause slower-moving legs.

So I did a little experiment.

I put vodka in one glass, and Bone Bourbon in another. Both were 45% ABV. Vodka, since it isn’t aged and it’s distilled to a very high proof, shouldn’t have much in it other than ethanol and water. I swirled both at the same time. The exact same thing happened in both glasses.

I’m not a chemist, and until we get a peer-reviewed study testing this in a more carefully controlled environment, I don’t want to draw too many conclusions. But I’m not convinced legs tell you about anything except alcohol content—and these days, we have labels for that.