Laws Whiskey House started in Colorado because of the hot days, cool nights, and thin mountain air. It was the first Colorado distillery to bottle bonded whiskey. There’s no “master distiller” because they say it takes a village to make whiskey, not just one person. Laws Village didn’t sell any whiskey for the first three years until they aged what they produced themselves.

The grains for Laws Whiskey House are used in a sour mash fermentation. They says that each mash bill gets its own optimal distillation process. Laws Whiskey House is not about shortcuts. The process to make their whiskey is time-intensive (and waiting until you have produced your own whiskey to sell anything is definitely not cheap or fast).

For this whiskey review we are diving into the second batch of the Henry Road Straight Malt Whiskey. According to the brand, “the mash bill for this second release of our Henry Road Straight Malt Whiskey is comprised of 100% malted barley. This includes a combination of malted heirloom two-row barley, a Munich malt punched up with some toasted Abbey and honey specialty malts all of which originate from the Cody family farm.”

The Cody family farm grows the heirloom two-row barley varietal that Laws Whiskey House uses as their base malts and claims it was “literally saved from extinction.” It had been too low-yield for commercial farmers but Cody didn’t want to let it go. Now the crop, grown on Henry Road, is just for Laws Whiskey House. Sounds like a win-win. 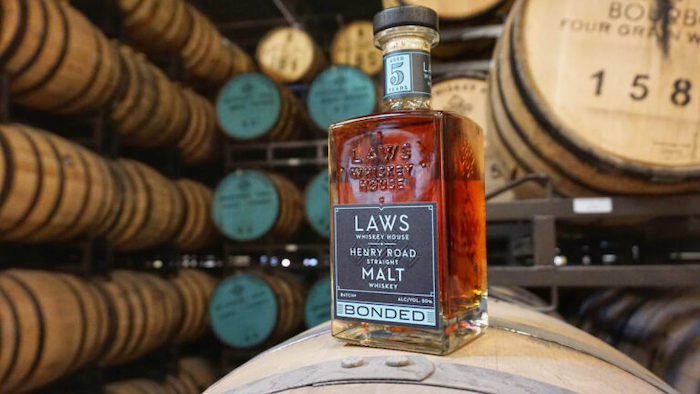 Nose: The nose was quite interesting on this whiskey. It was sweet and fruity with a natural twist. I found sawdust, resin, alfalfa, green apple, raisin, prunes, and rich umami.

Palate: The palate was a bit different then the nose but equally interesting. I detected notes of fir, tannins, figs, raisin, and resin. There’s also a saccharine finish.

I found this to be a great fall whiskey that trails into winter. I do think it’s more of a cool weather whiskey then the warmer months. It’s rich and fruity but very pleasant. If you liked those boxes of raisins as a kid, then this is the whiskey for you! It’s the adult raisin box. Now, if only we could pack this in our lunch for work.