Laws Whiskey House in Colorado is promoting a terroir-driven ethos with their whiskey making. Many craft distillers around the country claim to be inspired by provincial singularities but few can claim that their location was chosen for it. Rather than basing their craft in the land of their ancestry, this distillery planted its roots where it believed they would be the most successful.

Denver based Laws Whiskey House asserts that Colorado was selected for this award winning distillery with extreme intention. They believe that their whiskey benefits from the uniquely thin air and extreme temperature differentials in the Rocky Mountain region. Laws favors the growing conditions in the San Luis Valley and eastern Colorado plains where they source their heirloom and heritage grains.

By developing relationships with the farmers who cultivate their grains this distillery has embraced a grain to glass approach. Specialty grains are carefully selected and touted to deepen the flavor complexities of each sip.

For today’s selection, The Four Grain Straight Bourbon, this means a mash bill of 60% corn, 20% heirloom wheat, 10% heirloom rye and 10% malted barley. This is a mash with huge flavor potential and depth of character. Following distillation the bourbon is aged for three years in 53 gallon charred oak barrels.

It is bottled in fetching square glass emblazoned with geometric art deco designs. The delightful packaging tells the story of a modern distillery setting itself apart by bringing new attitudes and aesthetics to the world of craft whiskey. 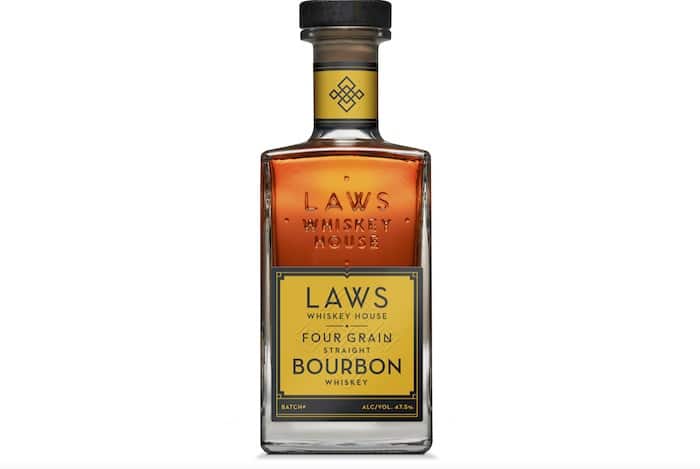 Nose: The nose is quite earthy with hay and dried apricot. It also has warming notes of vanilla, cinnamon and honey.

Palate: Oak and vanilla are firstly noted with tobacco and pepper emerging next. It is a lot spicier than expected with the flavor of cinnamon candies and allspice. The finish is smooth and creamy with orange essence.

This is not a calm whiskey and definitely has an edgy flavor composition. The taste of this fiery drink is perfectly in tune with the rugged outdoor presence of a Colorado mountaineer and less the relaxed demeanor of a weekender in Aspen.

I like a bold whiskey and though this one is a little on the experimental side I think does its job nicely. I would steer clear if you are a bourbon lover who avoids ryes. This one has quite a bit of spice.