Hopworks Urban Brewery (HUB) was a game-changer in the Portland beer scene when it arrived in 2007. It formed the beginning of a wave of breweries that brought a new level of branding from the ground level, and also a commitment to sustainability. In town, Hopworks’ beer is also synonymous with the cycling community, so much so, that its second location is fully decked out in bicycle frames. There is also an electricity generating bike one can ride to give back to the Earth, from which we greedy automatons take regularly.

Organic HUB Lager is one of its top-selling beers and is an ethically created answer to the ubiquitous macro lagers that pollute football stadiums and TV screens across the globe. As an interesting deviation from the beer game, brewmaster Christian Ettinger worked with Portland-based New Deal Distillery to do a double pot still distillation of the lager, followed by aging it for an undisclosed amount of time in a “variety of American oak barrels.”

The finished spirit, described by those behind it is a single malt whiskey, was released in very small quantities in Portland at the end of last year, and is up for review here. 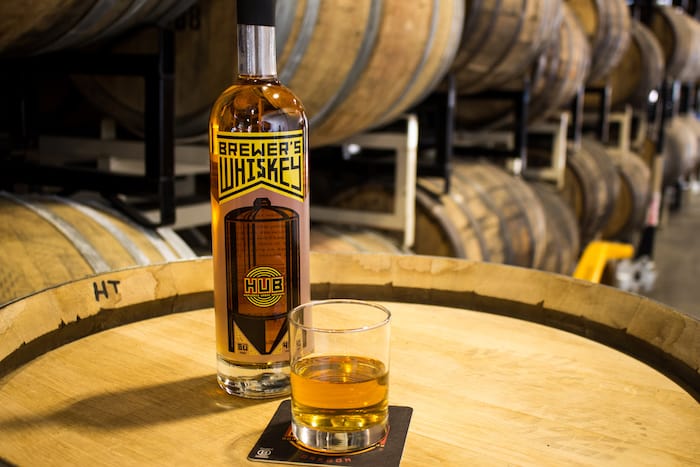 Vital Stats: 80 proof, distilled golden ale, no grain bill information, no age statement, but it was aged in “a variety of American oak barrels,” no pricing information, available in 750ml bottles.

Nose: Apples dominate, up front and pervasive. Deeper in the mix are hints of boiling wort and tobacco.

Palate: This whiskey is clean on the palate, medium-light bodied, with no noticeable heat. It tastes a bit flat, has a slightly medicinal character, and has notes of spiced apple cider.

Finish: This has a medium finish, that becomes slightly warming over time. It’s drying and somewhat astringent, with a hard candy sweetness that lingers.

Nose: Apples are still the largest part of the aroma, but water releases some of the compounds that give it more of a tobacco character, and a hint of clove emerges.

Palate: Water helped mellow out the medicinal qualities of the flavor, and an interesting carrot cake note became more prominent.

Finish: The water also reduced the astringency and it just became drying, and a bit sweeter.

Distilled beer always brings a finished spirit that is one part predictable, and one part unexpected. I am very familiar with the base beer because I spent many evenings during my first year in Portland at the original Hopworks location, and the organic lager was a go-to session beer. The expected part here is that the beer is still somewhat recognizable in distilled form. The unpredictable part is the strong apple overtone. After multiple pours I didn’t want to keep going back.

Ultimately, this is a fun bottle for Hopworks fanatics, and cool to bring out at the end of the night for a beer bottle share, but otherwise it’s not something to repeat, at least not with this beer.