One may not initially see the connection between the distilling and fermentation process and biochemistry, but former biochemist David Perkins saw enough similarities to confidently found High West Distillery in 2006. Perkins has said of the process, “You’d be amazed how similar it is. Basically it’s the same technology. Whiskey is essentially biotechnology. You grow up an organism – yeast, and they crank out a drug, ethanol –and it’s kind of the same thing.”

The distillery is based in Utah, a state that was crucial in the vote to end Prohibition, and is the first legal distillery in Utah since the 1870s. High West is a small batch distiller that originally opened with a 250-gallon still, growing in popularity over the years until finally opening new locations beyond its flagship in Park City. It boasts being the world’s only ski-in gastro-distillery, appealing to winter vacationers who want to step right off the chairlift and into the pub.

High West Distillery has produced a number of award-winning expressions and in 2016 was named the “Distiller of the Year” by Whiskey Advocate. Today’s tasting is of High West Double Rye!, a spirit that is sourced from MPG (Midwest Grain Products) and other producers. There is much secrecy around MPG and their collaborations with smaller craft “partners,” of which High West could be considered. While there are no exact details of the partnership, the distillery does work to incorporate their own unique qualities into their whiskey by experimenting with blend combinations and barrel finishes.

High West Double Rye! blends two rye whiskeys, both a minimum of two years old. The website states that “the exclamation point is to signify our aim with this whiskey: showcase the beauty that is rye and create the spiciest rye whiskey in the world.” I can’t say I agree they’ve done that. The ratio of the whiskeys is, as they say, “top secret,” but we do know that it is neither chill-filtered nor carbon treated. While there is information on some of the whiskey ratios, others are not revealed due to contractual obligations. 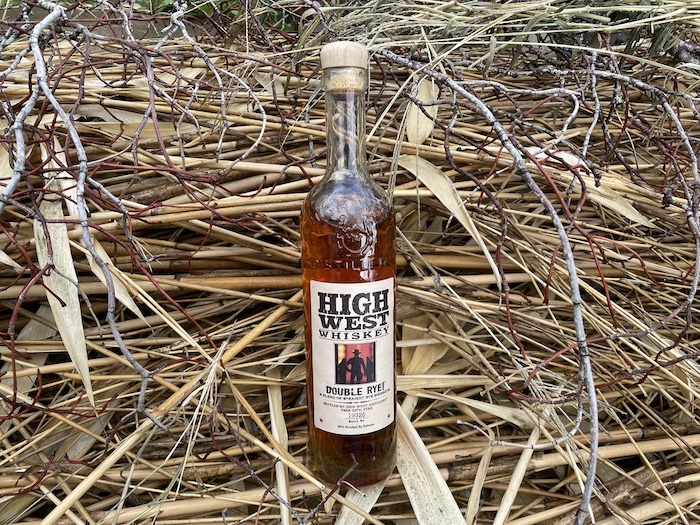 Nose: The whiskey has a weak nose, I honestly didn’t get a lot from it even after letting it breathe. Very faint notes of cinnamon came through, along with a bit of a cut stem scent.

Palate: There is a strangely diluted taste to this whiskey. With the boast of “the spiciest rye” I can categorically say there simply isn’t enough to deliver. There are some aromatic compounds within the expression, a bit of honeysuckle sweetness.

I neither liked nor disliked the High West Double Rye! I will definitely enjoy it as an addition to a cocktail, but there is something missing in the flavor profile that would elevate the whiskey to something memorable.