Unlike many cult whiskeys, Garrison Brothers have held on to their independent ownership: the family and a few friends, all local to the Texas Hill Country. Owner Dan Garrison came from an east coast advertising background and fell in love with the area.

If you’ve ever been to Texas, at anytime of year, you almost certainly encountered one thing that makes this whiskey different: the relentless Texas heat. The heat was so extreme that they lost gallons of their first round of whiskey. The barrels just couldn’t take it. What survived, though, was bourbon condensed: thicker, burly, the angels having exacted a high share. They were like those special casks seated high in a Kentucky rick house.

After, Garrison knew he needed tougher barrels, thicker staves. The Garrison Brothers Balmorhea Bourbon gets two sets of these new barrels, aging for four years in the first and an additional year in the second (which has a different char and toast profile).

Balmorhea sounds like a bluff overlooking the the Sound of Islay, when in fact it’s a combination of three surnames: Balcom, Morrow, Rhea. These three were an irrigation collective in the area in the early 20th century. Garrison’s family first enjoyed the place as a state park swimming spot: a giant freshwater pool built around the San Solomon springs.

The 1.3 acre pool was a New Deal project completed just after the Great Depression. After over fifty years, the wall enclosing the pool began to collapse.

Garrison Brothers began fundraising in 2018 to sponsor the repair, and Balmorhea Texas Straight Bourbon Whiskey was born. Their efforts, combined with those of other Texas companies and thousands of individual donors, made reopening the pool possible in 2019.

The bourbon has gone on to have a notoriety of its own, winning Jim Murray’s American Micro Whiskey of the year not once, but for two years running. 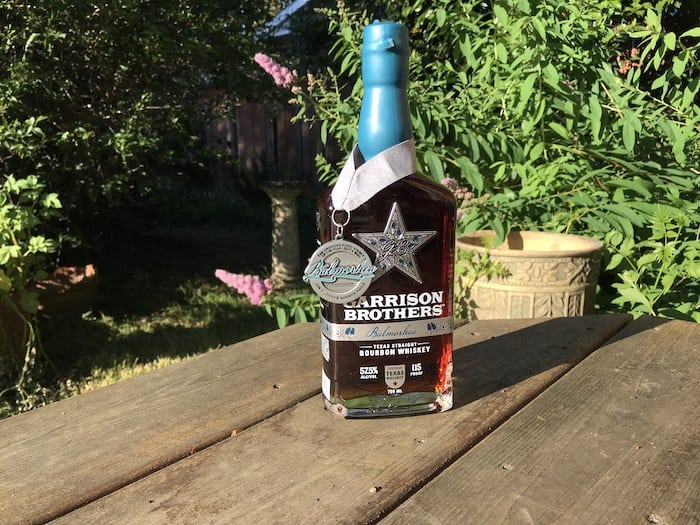 Vital Stats: Garrison Brothers Balmorhea Texas Straight Bourbon measures 115 proof. Its mash bill is undisclosed, but described by the distillery as ‘sweet.’ Aged for five years: four years in one set of new American oak barrels and one year in a second set. This whiskey sells for around $160 and can be found in a 750 mL in 27 states.

Appearance: Balmorhea is a very clear deep mahogany, like strong sweet tea. It coats the glass and quickly forms thick tears. This bottle came in a fancy black box and included a medal proclaiming Murray’s accolades.

Nose: The nose is sweet cedar and brown sugar mingled with dark cherry and pipe tobacco.

Palate: Nutmeg on the approach, followed by straight sweet shop: milk chocolate and candied walnuts, caramel sauce. It’s pleasantly syrupy in mouthfeel. Cherry cola works into the mid palate, with a tiny bit of black tea tannin on the back. The medium-long finish has a saline, savory note.

This bourbon is lauded for a reason. It's rich and special, the kind of stuff you want to sit with and think about. Sometimes when I taste it, I feel like it's lacking something and I can't quite put my finger on it. Other times, it's just gorgeous. Certainly worth your time if bourbon is one of your loves.

Texas whiskeys are all over the map, and this one is certainly in that robust Balcones style. I'm excited to see what comes out of the state in the next few years and hoping money doesn't screw it up.