Everything is Bigger in Texas, Including Bourbon

According to federal law, for a whiskey to be sold as bourbon, it must have certain characteristics: it has to be made in the United States, with at least 51% corn, and be distilled to 80% ABV or less. It must be aged in new, charred oak barrels.

That official definition, though, leaves plenty of space for interpretation; as any studious whiskey drinker knows, for example, beyond the 51% corn minimum, a particular bourbon’s mash bill is up to the distiller. That’s one of the basic “vital stats”—along with barrel type, ABV, and age—typically used to define a whiskey. There are other factors, though, that are much less well understood by the whiskey-drinking public, yet have just as big an impact on the final product. Near the top of that list? Climate.

In bourbon’s birthplace, Kentucky, warm, humid summers and cool winters mean temperatures in the rickhouses where whiskey matures undergo big swings both from season to season and from day to night. The multi-story construction of a rickhouse magnifies those temperature swings, with the barrels on the top floors getting substantially more heat than those on the bottom.

Those temperature swings are said to squeeze whiskey in and out of the microscopic pores of an oak barrel as it heats and cools. Kentucky distillers say the not-too-hot, not-too-cold climate in their state is ideal for aging whiskey. In a colder climate, the bourbon wouldn’t interact enough with the wood, while in a hotter climate, too much would be lost to the so-called angels’ share—evaporation, in other words.

As noted, though, bourbon can legally be made anywhere in the United States, and different climates necessarily have an influence on the final character of the whiskey. That claim about Kentucky being the “goldilocks” climate for bourbon bumps up against the fact that right now, a lot of very good bourbon is being made in a much hotter climate: the state of Texas.

Kentucky gets hot in the summertime—especially on the top floors of a rickhouse—but Texas heat is a different animal. In Hye, Texas, where Garrison Brothers Distillery is located, the average high temperature hits 90° or higher for four months out of the year. That persistent, intense heat changes the character of a whiskey. “I personally think we’re extracting stuff from the oak that others folks don’t get,” says Garrison Brothers distiller Donnis Todd. “It’s just so darn hot here.” 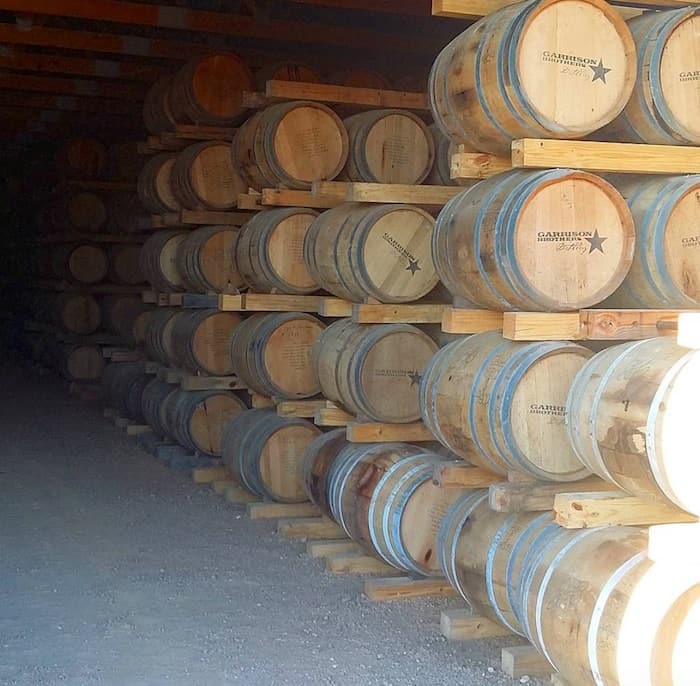 Instead of the traditional rickhouse, Garrison Brothers ages their whiskeys in one of a number of “barns” constructed in several styles: “We have 22 different barns,” says Todd. “Some are finished barns that have a predominant wind on top of a hill with a dogtrot through them, so they get plenty of new air makeup. Three of them are 50 by 100 and hold 4,000 barrels apiece, and those are just traditional pole barns. Then we have 16 of what we like to call hot boxes, and those get upwards of 120 degrees in July and August.”

Not only does the heat have an effect on the final character of the whiskey, but it makes for unique challenges in the aging process, one that local distillers have had to adapt to through trial and error. Early on at Garrison Brothers, barrels got so hot that the pressure built up inside caused them to explode. The solution was to custom-order extra-sturdy barrels that could handle higher pressure. “The staves are much thicker than traditional barrels,” says Todd. They order those custom barrels in 15 and 30 gallons, quite a bit smaller than the traditional 53-gallon cask.

The other challenge Texas distillers contend with is harder to mitigate: the proverbial angels are extra-thirsty in that hot climate. “Every barrel’s different,” says Todd, “but to give an average, currently we’re losing between 10 and 15% every year… Right now I’m letting barrels age between four and six years, so you start adding that up: with a four-year-old, I’ve easily lost 40%. A five-year-old? I’ve lost half of what I put in there.” Kentucky distillers, by comparison, lose closer to five percent to evaporation each year. That loss has a sizable effect on the distillery’s bottom line, and it’s part of the reason Garrison Brothers bourbons retail for around $70 and up.

What exactly does Texas heat do to a whiskey’s flavor profile? It’s a cringeworthy cliché, but there’s really no single word that describes Texas bourbons better than “big.” Garrison Brothers Estacado, which we reviewed last year, has a dense, complex nose, full of cinnamon and grain and a whisper of fruit; on the palate, it’s sticky, spicy, and mouth-filling, demanding your full attention. Balcones’s Texas Blue Corn Bourbon is similarly intense, with loads of darker-hued notes—tobacco, leather, burnt sugar—adding depth to the typical vanilla-and-caramel bourbon profile.

“I do think that our Texas bourbons have a unique mouthfeel and amazing color and taste, all because of our Texas heat,” says Todd. “Folks still have to give it time—just because we’re here in Texas, if you leave it in [the barrel] two years and a day, you’re not going to get that.” It’s also not fair to boil down (no pun intended) everything Garrison Brothers—or Ranger Creek or Balcones or any other Texas distillery—does to climate alone. Plenty of other factors set these distilleries apart both from each other and from other craft distillers around the country. Garrison Brothers, for example, uses estate-grown organic corn and wheat, a unique yeast strain, and a long, single-pass distillation.

All that adds up, though, to a distinctive, identifiably Texan product. The rise of new whiskey regions within existing broad categories like bourbon, rye, and single malt, is one of the most exciting developments in the craft spirits landscape. And climate—from what grains grow in a certain area to how whiskeys age under varying conditions—plays a big role in defining those regions.