Four Roses is an oft-talked about bourbon distillery, and rightly so. Bourbon is an industry partly built on myth and mystique, and when compared to fellow old stalwarts of the Kentucky bourbon industry the 130-year history of Four Roses is distinct. A lesser known aspect of Four Roses lore resides around a mostly ignored dispute over the origin of the name “Four Roses.” Their offerings are unique, as well. Four Roses uses two separate mash bills and five different yeast strains, and whether it’s true or not, I have always personally viewed the “E” offerings as Four Roses privately snickering at the rest of the industry.

Depending on who you talk to, if one were to ask a bourbon professional what constitutes “high-rye,” you are most likely to get an answer back that falls between 15-20%. Though I have heard some claim their 13% rye to be high-rye, I do not, and neither do most people I’ve chose to discuss this predicament with. Four Roses, meanwhile, interestingly refers to their 20% rye mash “E” offerings as “low-rye.” They seem to believe mightily in the power of rye grain in bourbon, and I see this subtle play on terminology as them entertaining themselves and playfully poking at their neighbors. Despite being highly competitive, the whiskey industry tends to be pretty friendly and cordial with one another. 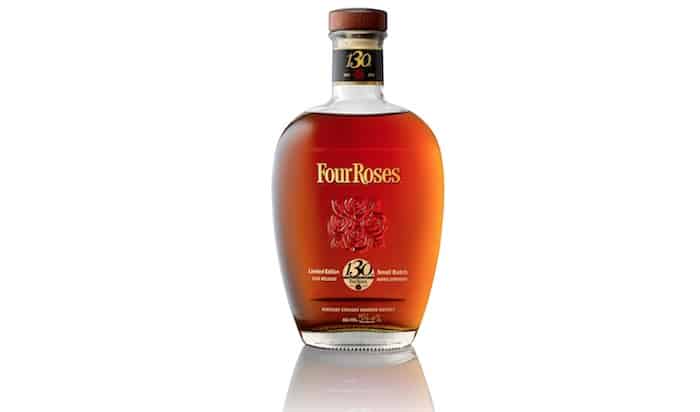 Vital Stats: A cask strength blend of four bourbons ranging in age from 10-16 years. Approximately 13,140 750ml bottles released. Prices vary greatly depending on the market. I have seen as low as $140 and as high as $600 per bottle.

Appearance: Deep amber reminiscent of fresh wood stain. There is sediment in this bourbon, it is not to be worried about.

Nose: More balanced than anticipated. It’s like walking into a candy store that makes its own salted caramel. A pinch of barnyard quality brings the sweet and slightly salty notes together nicely.

Palate: Thinner mouthfeel compared to a lot of cask strength whiskies, but a pleasant warming sensation lingers in the mouth for a while. Less woodsy than expected given the ages of the bourbons. It’s a bit earthy with perfume and medicinal notes on the finish. Bourbon sweet, but off-dry.

By nature of knowing what they’re doing and using bourbon with some extra aging, Four Roses Limited Edition Small Batch releases are almost certain to be good whiskey every time. The question has more become are you willing to pay the price of acquiring a bottle for your personal collection? Four Roses 130th Anniversary is tasty whiskey indeed, but is somewhat far from being one of my favorite limited editions Four Roses has released.

I would recommend finding a dram at the bar. With ~13,140 bottles out there, plenty of places specializing in whiskey should be able to score a bottle from their distributor.