Four Roses! I love me some Four Roses. I’m not going to lie: I am going into this review with my happy, bourbon-colored glasses on. I love Four Roses for lots of reasons, not the least of which is that I was recently at an event where they had a booth here in Portland, Oregon—and they gave me a Four Roses baseball cap “just because” and they didn’t even know I review whiskies.

Promotional items aside, Four Roses has been putting out whiskies for 130 years, ever since founder Paul Jones Jr., named his bourbon after the occasion where his true love said, “yes” with a corsage of four red roses. (Who doesn’t love a good romantic story that includes brown booze at the onset?)

Four Roses is pretty much the only bourbon distillery combining five proprietary yeast strains with two separate mash bills to handcraft ten distinct bourbons. To go into this further—and I’m warning you, this is going to begin like a sample GRE exam logics question—each recipe is described by a four letter “code.” This indicates the production facility, the mashbill, the spirit type and the yeast strain.

All 10 recipes are used in Four Roses’ yellow label, which is what I review here. In September 2015, Brent Elliott took over as Four Roses’ Master Distiller from Jim Rutledge, and the iconic bottle hosted on most back bars across America now carries his name. 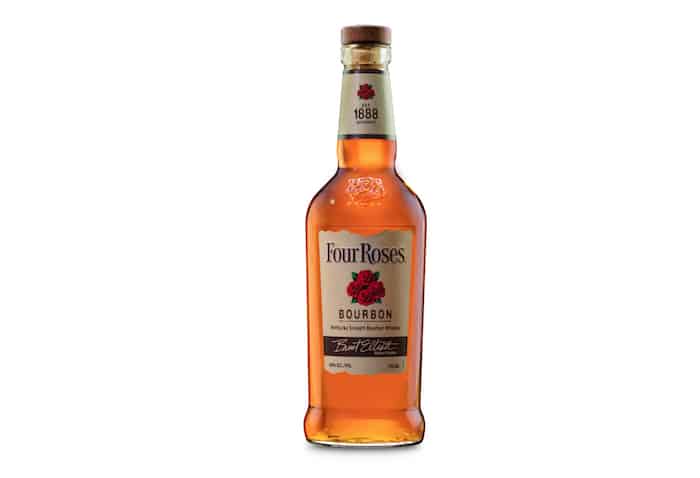 Appearance: It’s yellow label—and the bourbon itself has a yellow quality to it. Like finding old newspaper clippings in an attic, especially the extra-yellowed outer corners (why does that happen?). Also: weak ginger or lemon teas.

Nose: It smells…like bourbon. I know, this is not saying a lot but I get to taste a lot of bourbon. Some smell more like bourbon than others. That doesn’t mean it’s alcohol-ey, it means it smells like good bourbon. Rich, a browned butter, and the warm pleasantness that surrounds you when you’re well into a glass sitting with someone you like while sitting by a fire. It smells, quite frankly, like comfort. (Also, apples.)

Palate: I’ve tried a bunch of Four Roses concoctions, and they never disappoint. This one is easy-drinking and light, and yet with enough substance to do well on its own, neat, or on the rocks. It has a light syrup mouthfeel but not syrupy sweetness. It’s a little chewy. Also, apples. Again. It tastes like its smell, which is to say good bourbon, not surprising or amazing, but a solid, easy-drinking beverage. It tastes like a more expensive bottle.

This batch of Four Roses is like the little black dress of bourbon. You can dress it up or you can just throw it on after oversleeping and still make it not only work, but also look good. This is appropriate for everything. And reasonable! Sometimes, you don’t want something overly smoky or weird or redolent with alcohol or a bottle you won’t open except for your best guests. It’s like Four Roses took everything I don’t like about whiskey and excised it from this batch. That’s kind of a double-negative but in this case it’s very much a positive. Well-done, Four Roses.