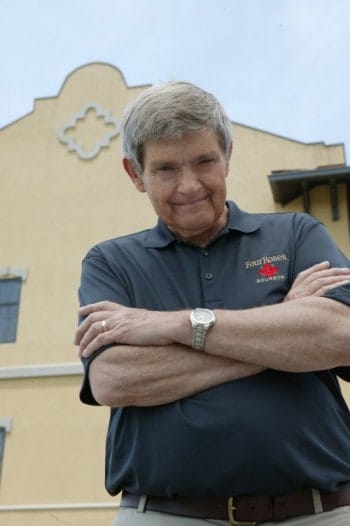 “We’re in the middle of the bourbon revolution. We’re in the middle of the bourbon renaissance. It’s fantastic,” says Four Roses Brand Ambassador Al Young. When Young first started working for what is today known as Four Roses in 1967, he was in the Quality Control lab at Seagram’s Calvert Distillery at 7th and Central in Louisville. Seagram’s owned five plants in Kentucky as well as plants in Maryland, Canada, Indiana, and multiple export businesses. “They were one of the biggest players at the time,” says Young.

During his tenure in Louisville he worked on a daily basis with Ed Foote, who would go on to be the last Master Distiller at Stitzel-Weller before it was shut down in the early 90s.  “I worked with him at the Louisville plant from 67-83. He was in production and I was working in the quality lab or the control lab,” he says, noting the difference in the two is that one dealt with bottling and the other dealt with grains. “We interacted almost on a daily basis. He was always quick with a smile. Knew his craft, knew when things weren’t being done correctly. He was one of the people who trained me to do some of the things I did later in running the distillery.”

Then the dark days of bourbon hit. U.S. consumers were more interested in vodka and gin in the 1970s, and bourbon wasn’t selling very well. Seagram’s started selling off their American whiskey production facilities, says Young, and “a lot of it had to do with not being willing to stay with brown goods through the dark years from 70s-90s.” Despite falling sales in the U.S., Young points out, sales overseas were booming. “It was an incongruity because bourbon was growing great overseas but some of the other brands weren’t doing as well for them. They were a blended whiskey house out of Canada.”

But the Four Roses story starts long before any of that. Legend has it Paul Jones, Jr. proposed to his beloved and she was to accept his proposal by wearing a corsage of four roses. She accepted, and he named his company Four Roses, but for whatever reason Jones died a bachelor in 1894. The original company was based in Louisville. Four Roses has been sold since 1888 according to Young.

Seagram’s bought Four Roses’ Frankfort Distillery in Lawrenceburg in 1946, one of five distilling operations they owned in Kentucky alone. “I’ve worked a lot of different jobs for Seagram’s and Four Roses, always in the production unit except for the last eight when I’ve been in sales and marketing as Brand Ambassador,” says Young. He was a supervisor at Louisville plant from 1967-82, but when it was closed in 1983 he was sent to work at the facility in Lawrenceburg, Indiana. After seven years he moved over to the Four Roses Distillery in Lawrenceburg, Kentucky, where he worked with the late Ova Haney.

“Ova was the consummate Gentleman Distiller. He knew his craft. He had an interest in history, which kind of got all of this started,” says Young. “After he retired it kind of led me into wanting to develop the history of Four Roses.” Young did an education program in the 1990s with Jim Rutledge, Ova Haney, and Pete Gunterman called the Four Roses Forum all about the history of Four Roses for the sales force. It covered how to make Four Roses as well as the history of the brand and a little about marketing.

Young had already begun compiling history, but when the Seagram’s Whiskey Museum in Canada was closed he received a lot of Four Roses memorabilia. From there the collection snowballed. “We had started the collection a long time ago when Seagram’s had a museum in Canada. When they did away with their museum they sent us a lot of their collection. Then we started collecting stuff on our own, people would give us stuff, and we would buy stuff on eBay.”

The collection has been moved multiple times due to construction, and Young reports it is currently being re-cataloged. “We’re in the process of cataloging things again because of multiple moves and we’re trying to find a way to display things better for everyone.” Most of the collection is from the post-Prohibition era, though. “Unfortunately it’s not a complete collection because much of pre-prohibition stuff was destroyed.” He explains many people didn’t want anyone to know they had been involved in alcohol production during Prohibition so evidence was destroyed.

As the Distillery Manager, Young was responsible for the day-to-day operations of Four Roses. If anything ever went wrong, though he says it rarely did, he was the first to receive a call. “The biggest calamity was when Seagram’s went out of business, but we’ve always been here to help each other out.” He was primarily responsible for ordering grain, checking on the quality of the product, the day to day operations, staffing, and making sure the distillate was good enough to put in the barrel.

Young spent the last few years of his production career working with Master Distiller Jim Rutledge, whose dedication brought Four Roses back to the American market. Without Rutledge, the history of the Four Roses brand might be a moot point. Young was set to retire about eight years ago when he was approached to write a history of Four Roses. He accepted the challenge and his book, Four Roses: The Return of a Whiskey Legend was published in 2010. It is now in its 3rd revision and printing.

These days Young spends a fair amount of time on the road educating consumers and retailers alike. “There’s always a fresh crop of bartenders to teach the Four Roses story to.” He travels to Whiskey Live, Whiskey Fest, The Bourbon Festival, The Bourbon Affair, The Bourbon Classic, and Forcastle Festival, among others, to teach consumers about the history of Four Roses. He’s also responsible for conducting tastings at charity events and retail locations. Social media and the Internet have become great tools for anyone wanting to know more about bourbon, says Young. “The public has become more informed. They’re already ready and eager when they come to some of these events. It’s not like we’re treading in new territory when we come to some of these events.”

As for the future of Four Roses, “we are increasing our capacity here at the distillery by adding another still, fermenters, and a doubler. Out at Cox’s Creek we’re putting in new offices and bottling facilities. We’re preparing for the long haul with no sacrifice in quality. It would have probably been more effective to build a new still at Cox’s Creek, but our water source here in Lawrenceburg, The Salt River, is very important to what we do.”

“I feel blessed that I’ve been able to have what I have. A lot of people go through this business and no one ever knows what they did.”