Editor’s Note: This whiskey was provided to us as a review sample by Four Gate. This in no way, per our editorial policies, influenced the final outcome of this review. It should also be noted that by clicking the buy link towards the bottom of this review our site receives a small referral payment which helps to support, but not influence, our editorial and other costs.

Here we have the Kelvin Collaboration II Batch 6 by Four Gate. The name on the label is a considerable mouthful for a whiskey. As will happen, there is actually a story to it. This is the sixth creation by Four Gate. The first batch was the first Kelvin Collaboration with a finish of sherry and dark rum casks. This particular one has a finish from cognac and dark rum casks. In fact, the rum casks are sourced from the same producers as the very first batch.

“Fans of batch 1 will really like this,” said Four Gate Chief Blending Officer, Bill Straub, at the time it was released. “It’s definitely a return to the combination of fortified wine fruitiness blended with that decadent dark rum cask sweetness.”

If you’re not familiar with Four Gate, they are a Kentucky-based company that specializes in sourced whiskey blends, largely in cooperation with their friends at the Kelvin Cooperage. The gang has done some pretty fun stuff with barrels. Batch number two was finished in orange curacao, then gin, and then bourbon. Number four was an entirely new beast, whereupon the cooperage de-constructed different barrels of different char levels and mixed them into new ones.

But sometimes, a blend is perfect as it is, and well, you’ll never know until you taste it. Thus far, there are only stand alone blends from Four Gate, which are the Foundation releases, which were batches three and five.

I do believe that they are on the right path, especially since the first batch was released in April of 2019, and now we already are looking at batch number six here. I’ll admit to being curious as to what comes next. 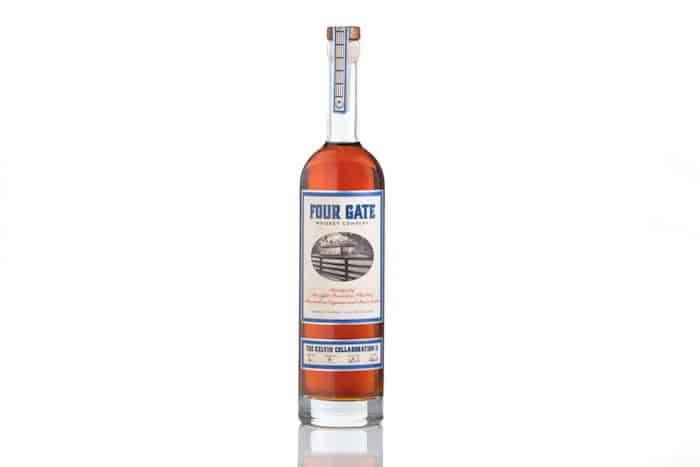 Appearance: A middle-shade of brown similar to a dark honey. Gave it a swirl and found sparse but long legs.

Nose: A mix of fall or winter aromas. After the alcohol punches you in the face, picked up essences of raisin bread, graham cracker, and dark cherry.

Palate: Once again, the booze starts off big right off the bat and quickly went for a sip of water. Thereafter immediately picked up subtle flavors of butterscotch and candied orange on the side palate. That said, ready for the second sip. Big whiskey with baking spice followed by the sweeter elements previously mentioned. Let’s add a touch of water. Now we’re talking about balance of high alcohol and classic bourbon notes.

Upon receiving this whiskey and a small information card, I liked the direction that it was headed towards. 12-years old, barrel strength, and an interesting combination of finishes. All good things.

The tasting experience, however, wasn't quite right. On it's own, the balance was just a bit off, just too high octane. But with the addition of some water, that's a game changer. It's like that one perfectly timed piece when playing tetris. Happy dances and harmony.

I do like the direction these guys are going in and am curious as to what previous batches tasted like. Pretty darn good for a sixth release in about a year's time.