Editor’s Note: This whiskey was provided to us as a review sample by Four Gate Whiskey Company. This in no way, per our editorial policies, influenced the final outcome of this review. It should also be noted that by clicking the buy link towards the bottom of this review our site receives a small referral payment which helps to support, but not influence, our editorial and other costs.

Four Gate Whiskey Company did something very unique for this particular batch of whiskey. The team at Kelvin Cooperage used staves from different barrels that they charred, some as #2 char and some as #4 char combined with others that were toasted, before taking them apart to reassemble into these new, innovative casks. This resulting zebra patterned casks were coined “Split Stave” Chief Barrel Officer, Bob D’Antoni. It not only seems genius but they also look very beautiful, maybe a bit circus like.

What went into those Split Stave barrels was a blend of two different whiskies. One of those whiskies was a five and a half year old straight Kentucky bourbon and the other was a twelve year old straight Kentucky bourbon. This two whiskey blend stayed in the Split Stave barrels for five months before being bottled and shared as this limited release, batch 4.

Not only is this a very limited release with only 2,700 bottles of this whiskey but it’s also only available in Kentucky and Tennessee. I’m not sure how long it will stay around so make sure to grab a bottle while you can if you’re in that area or maybe ask a friend to grab one for you. Batch 5 has already been released but it’s not anything like Batch 4. Only Four Gate knows if they’ll recreate this experiment. I’m guessing, or maybe hoping, they will. 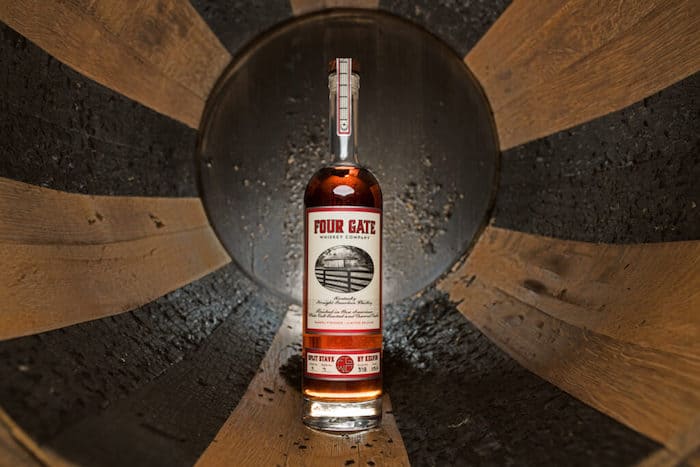 Nose: There’s a spicy floral scent like a bouquet of fresh flowers.

Palate: This whiskey is a bit hot without added water drops. After adding a touch of water the flavors that seem to come out most are oak and caramel with a cinnamon heat. It’s a very warming whiskey.

With a splash of water Four Gate Batch 4 Split Stave bourbon gets more character and a richer nose. It becomes less floral and more like a wilted honey suckle. Without the water it's got a lot more heat on both the nose and the palate. I could definitely taste that oaky char from the barrels but it smooths out with the touches of cinnamon and caramel sweetness.