Editor’s Note: This whiskey was provided to us as a review sample by Far North Spirits. This in no way, per our editorial policies, influenced the final outcome of this review. It should also be noted that by clicking the buy link towards the bottom of this review our site receives a small referral payment which helps to support, but not influence, our editorial and other costs.

Far North is all about homegrown. This estate distillery is focusing on the most fundamental aspects of whiskey distillation. The grain, water and sourcing are all focused on their Minnesota location, with an eye out for sustainability and environmentalism. The farm distillery has been in the Swanson family (of Michael Swanson, co-founder and head distiller) for over a hundred years, and in its time has grown wheat, corn and rye – all the standards in American whiskey.

And the distillers put a huge focus on these grains. In addition to growing terroir-specific and tasty grains, the distillery chooses to grow ones that are sustainable as well. They’ve chosen non-GMO varietals that hold up well to the nearly subarctic climate.

The corn comes in two varieties, Blue River Organic and Minnesota 13 Heirloom. Being non-GMO requires less chemical use, according to the distillery. Far North’s main whiskey focuses are their rye expressions, making their corn needs fairly low. Because of this, corn tends to be planted less often, and crop rotations aren’t necessary.

This is the second bourbon expression from Far North, a five-year-old single barrel version of the first (which in 2019 won Best Bourbon in Minnesota from the American Craft Spirits Association). When I asked Michael Swanson about the future of new bourbons in the company, he said that there are possibilities. In particular he was considering a wheated bourbon.

The distillery’s focus will still be rye; however, we don’t need to fear the loss of this delightful expression. According to Swanson, “after tasting that five-year bourbon, I’m going to be making a lot more of it.”

And I have to profess myself glad to hear it. I found this bourbon wildly unique and tasty, but you don’t have to take my word for it: It’s already been named a 2021 Good Food Award Finalist. 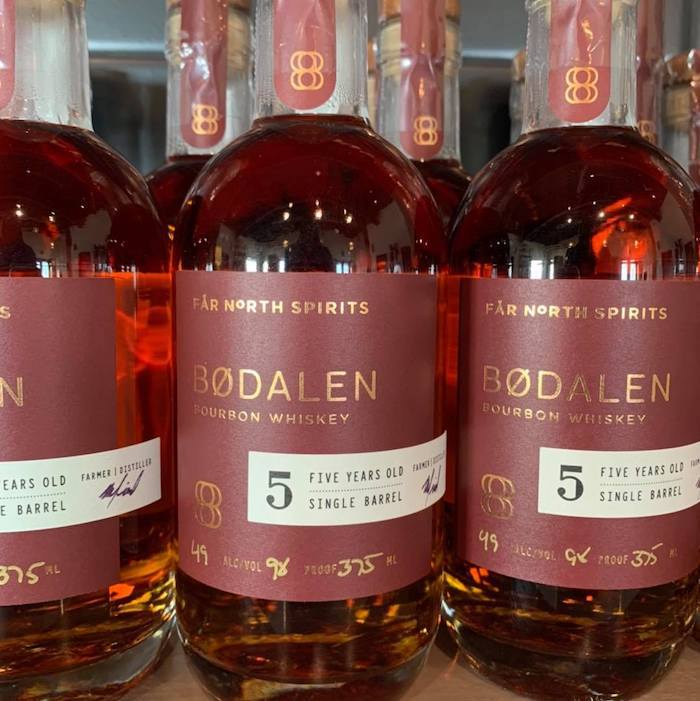 Nose: Very earthy, hints of pine trees lead into lemon zest and orange marmalade, with a touch of vanilla.

Palate: Syrupy thick. Up front is the freshness of hay, then becomes hearty cereal grains like whole wheat bread. Oak and rye grassiness pop up in the middle, then mostly fade into a long finish of cornflakes.

This is a bourbon the likes of which I really haven’t tried before. It tastes more like an experience than a collection of flavors, though it’s rich in those too. The rye is very apparent, but different from how rye usually presents. This whiskey somehow reminds me of childhood, of playing outside in the afternoon in the first warm days of the year.