Kentucky may be home to bourbon, but I have a personal association with whiskey and the north — the Northeast where I’m originally from, and the Northwest where I now live. Admittedly, it has something to do with the seasonal change in these areas, and the craving for warmth at certain times of year. While we certainly enjoy whiskey year-round, there’s something about the crispness of fall and the chill of wintry weather that makes a delicious whiskey all the more appealing and enticing, made even better when sipped by a crackling fire (indoors or outside).

The Pacific Northwest (PNW) is home to craft-made and artisan everything, including numerous distillers. Spokane, Washington is home to one such outfit: Dry Fly Distillery. It was founded in 2007 by friends and food industry veterans Don Poffenroth and Ken Fleischmann, who were inspired by their “mutual love of hand-crafted spirits and the natural beauty and purity of the Northwest” to make a career change and establish Dry Fly Distilling.

Ron and Ken have since been credited with helping bring to life 2008 craft distilling legislation in Washington that helped open the doors for a boom across the industry state-wide. The law in essence makes it cheaper and faster for distillers to obtain and maintain necessary annual licensure, as well as permits sampling and selling liquor out of a distillery (versus sending patrons to a nearby bar for a taste). This understandably had a positive ripple effect, inspiring others to go into the business with fewer previous roadblocks. (On a related note, here’s a lesser known fact to non-PNWers: restrictions in Washington still limit craft distillers in the state to pouring no more than 2 ounces per person per day.)

In keeping with regional and artisan trends alike, Dry Fly sources ingredients from eastern Washington to make its vodka, gin and whiskey. Its success seems to be chugging along steadily, generating quite a volume of awards and recognition for its spirits, and earlier this year opened a new tasting room.

Dry Fly espouses a focus on integrity, authenticity and consistency, operating a “farm to bottle” approach — using ingredients and even building materials from local producers — and centering its production around a 450-liter Christian Carl pot still from Germany. Their whiskey offerings include several wheat whiskies, including its Straight Triticale Whiskey and a Dry Fly Cask Wheat Whiskey. The latter is made from Dry Fly’s Wheat Whiskey — but at the end of the production, it is bottled at 120 proof (cask strength), rather than 90. Cask strength, or barrel proof, whiskey is always a bit alluring but can be very hit or miss. Here, I tasted Dry Fly’s Cask Wheat Whiskey. 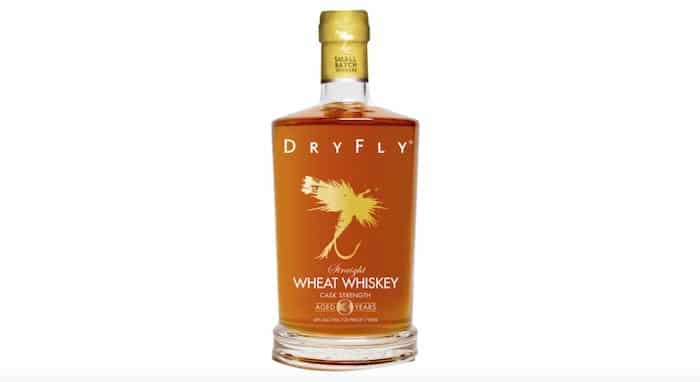 Vital Stats: Made from 100% soft white wheat from Washington, twice-distilled in “traditional American whiskey style,” aged for three years in new American Oak barrels with a #3 char, and bottled at 120 proof. The 750 ML bottle retails for about $52.99.

Appearance: Rich amber with a rosy hue that comes through when held up to the light. Thin, even legs.

Nose: There are a few higher notes that let you know this is higher in alcohol, but, most predominant is sweetness — a mix of candied dried fruit, whipped honey and toffee.

Palate: Warm and easy, with a slow and gentle finish. Bold, but by no means overpowering, character. A swath of buttery toffee comes through, and even a touch of vanilla-rum sweetness, followed by cardamom and pepper spice, and toasted oak.

Dry Fly’s description of its Cask Wheat Whiskey that it “drinks much softer than its 120 proof” is most definitely true. It’s easy and delightful and unexpected. It has an elegance and also a coziness, and it offers something different from standard bourbon or rye. Compared to other cask strength whiskey, such as Elijah Craig Barrel Proof Bourbon, Dry Fly is much less sharp and much softer. Given its relative youth, I’d be curious to know how Dry Fly Cask Wheat Whiskey would develop with a few more years in the barrel.

4
User Rating 3.11 (38 votes)
Sending
151
Shares
3.9k
Views
Share on FacebookShare on TwitterGet Our Newsletter
Cheers to the Dads! Personalize a bottle of his favorite whiskey to create a modern gift for the modern man. Use code: FATHERSDAY20 for $20 off your next order of $100 or more at ReserveBar