Unless you’re a farmer specializing in cow-feed or you’re a biologist specializing in cereal grain genomics, triticale probably means nothing to the average person browsing the whiskey section of their local liquor store.

That’s something Spokane, Wash.-based distillery Dry Fly is looking to change and capitalize on with its Straight Triticale whiskey.

First, the obvious: what is triticale? The short answer is that it’s a hybrid of rye and wheat. First bred in the mid 1870s in Scotland, triticale was meant to combine the high-yield, grain quality and disease resistance of wheat with the “vigor and hardiness” of rye, according to one 30-year-old academic paper I found.

While triticale has gotten some traction in places like Poland and China, generally it seems to spent the last half century on the cusp of becoming the prolific uber-grain it was envisioned to be.

A local whiskey club in Spokane reported that while rye does not grow well in Washington, triticale is prolific there, including at the primary nearby farm where Dry Fly sources its grains. Triticale, therefore, seems like a natural way to attempt a rye-like spirit. 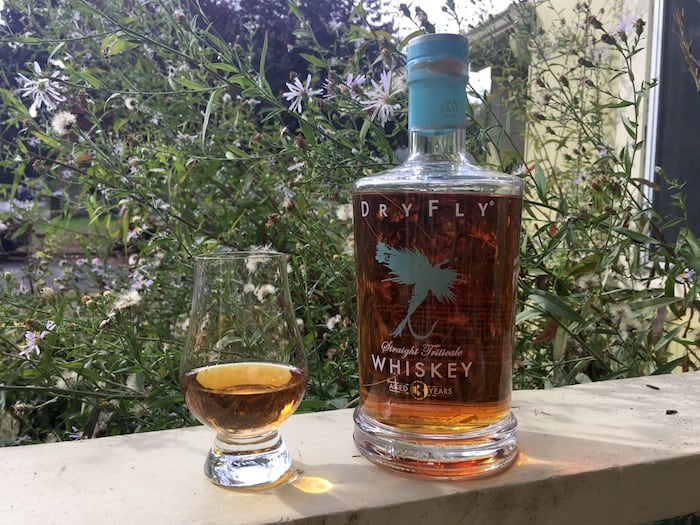 Vital stats: Straight whiskey using triticale grain for the mash, aged three years in new American oak barrels and bottled at 90 proof. A 750-milliliter bottle sells for somewhere between $30 and $50.

Appearance: Either in the glass or in the bottle, Dry Fly Straight Triticale Whiskey takes a rich, amber color, a touch darker than average but well within the normal hue for whiskey.

Nose: A sniff brings a gentle waft of sweet vanilla with a faint but apparent undercurrent of wheat that gradually gives way to a bouquet dominated by rye, still sweet but more like an earthy, spicy caramel, with notes of pepper, cloves, allspice and touches of lavender and smoke.

Palate: Much like with the nose, a sip rolls onto the tongue on like a sweet wheaty vanilla, fairly nondescript with faint touches of flowers and spices. That lingers on the tongue for a few seconds before the rye once again begins to make an entrance, bringing with it spices like pepper and cloves. Those elements grow stronger as that sip sits on the tongue, but doesn’t have the unrelenting intensity that more potent ryes often carry.

Swallowing brings a burst of spicy rye – though again milder than most straight ryes – but that quickly fades to back to that sweet, wheaty vanilla, but earthier this time with notes of that residual spicy rye gently flaring up for a few seconds as the whiskey leaves a light coat on the tongue.

Dry Fly’s Straight Triticale Whiskey reminded me of a lot of many whiskeys, but it’s still not quite like anything I’ve ever tried before. It seems obvious that a cross between wheat and rye would have elements of both kinds of grain when distilled, but I was surprised by how well this whiskey exemplified its two genetic forebearers. This whiskey managed to dance artfully between the wheat and rye influences, one growing stronger then yielding to the other for a richer sipping experience.

While Straight Triticale Whiskey doesn’t have any unique and revolutionary flavors, its uniqueness lies its ability to represent both wheat and rye in one dram. That makes this a whiskey worth picking up.