Copper Fox Rye doesn’t taste like any other rye I’ve had. I’m very familiar with the Kentucky and Indiana mass produced ryes. But this rye was a surprise, it’s truly unique in many ways.

Copper Fox Distillery can be considered a craft whiskey company. They are a true “farm to table” distiller. All of the grains used in their whiskeys are grown in Virginia, by one farmer.

The mash bill of the Copper Fox Rye is no secret, it’s listed right on the bottle. It’s comprised of 2/3 Virginia grown rye and 1/3 hand malted barley. That’s right, hand malted in the USA.  In 2005, Copper Fox Distillery opened the first US distillery malt floor and kiln since Prohibition. The barley is kiln dried with tasty apple and cherry wood smoke, instead of peat.

Being named Copper Fox Distillery, they fittingly use copper pot stills. The rye is double distilled between 150 to 160 proof to enhance the fruit flavors.

The aging is short, only 19 months, but intense. It rests in used bourbon barrels in combination with new and used apple wood and oak chips. Copper Fox is one of the only distilleries to age whiskey with toasted apple wood. The whiskey is then aged further in a second used bourbon barrel. Then it’s non-chill filtered to retain more of the fruity flavor.

Rick Wasmund, The founder of Copper Fox Distillery, trained in Scotland at the Bowmore distillery, where he was encouraged to experiment. After he interned at Bowmore, he came back to the states and created something very unique. There is so much more to the story that can be explained here.

This review is for the blue top wax seal. In comparison, the standard rye used to have a red top. The blue top takes the standard red top rye and further ages it in used port style wine casks from a local winery. These days the wax has been replaced with a sticker seal. 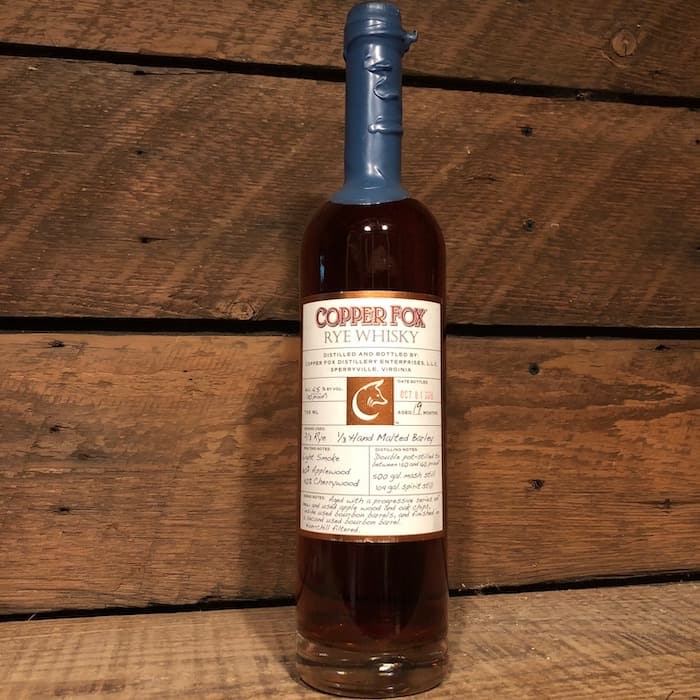 Appearance: The whiskey has a very rich dark copper color. Also, it’s non-chill filtered and may contain sediment at the bottom of the bottle.

Palate: The green apple soothes out to have a fresh yet malty silky mouthfeel. It definitely has a peppery spice which has a mineral dry finish. Wine cherry notes are also prominent.

I really appreciate how the style of this rye differs from the norm. It's also quite extraordinary that they hand malt and age with apple wood. I'm a big fan of pot-stilled whiskeys, too. And if all that isn't enough, the same farmer grows all their grain in Virginia.

I would say this rye is more for the Scotch drinker than the bourbon drinker, but it crosses boundaries. I'm curious to try some of their other expressions.