The story behind Clyde May’s Whiskey is quite interesting: Clyde May was in the moonshine business from the 50’s through the 80’s in Alabama (less an 18 month stint at Maxwell Air Force base in 1973 for, of course, running moonshine) after he was discharged from the Army during WWII after being injured in battle. Clyde had a reputation for producing good quality hooch from a homemade copper built to his specifications.

After Clyde’s death in 1990, his son, Kenny, started Conecuh Ridge, using Alabama water trucked out to Bardstown, Kentucky, to be used in distilling this Alabama style whiskey in accordance with his father’s recipe. The addition of dried apples to barrels when aging adds a distinct smooth and fruity note that makes this an “Alabama style whiskey” – an innovation, it is claimed, that is the brainchild of Clyde himself. However, according to their website, they no longer use dried apples when aging; instead, apple essence is “gently folded” into the spirit after it is aged.

In 2004, Kenny May was found guilty of selling liquor without a license, possession of excessive amounts of alcohol, and distributing alcohol to a minor, encouraging him to remove himself from the brand. After a few handoffs, the house is currently run by Conecuh Ridge Distillery Group with Ron Call as their whiskey master.

Clyde May’s Alabama Style Whiskey is still not made in Alabama (although they have recently announced plans to build a distillery in Troy, Alabama). It remains sourced from Willet Distillery (also known as KBD – Kentucky Bourbon Distillers), then shipped to and aged in Alabama. 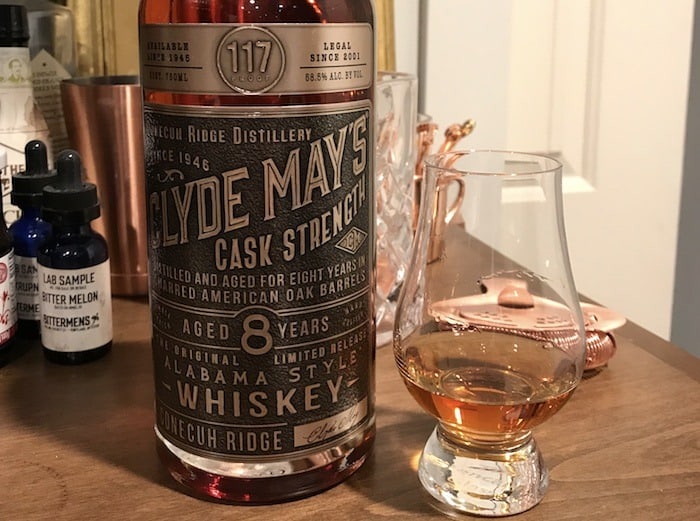 Appearance: There’s a distinctive warm cherry wood color to the whiskey which pales slightly at the edges.

Palate: A burst of heat at the first sip fades quickly to warm, oaky notes of vanilla, fondant, candied orange, white pepper, and light fall spices, although not mouth-smackingly tannic.

A solid whiskey that, while expensive and high proof, is fine for sipping neat. However, I would suggest a single cube of ice or a few dashes of water to really help bring out the softer notes in this spirit, especially those hints of apple. If you’re into small production spirits and want to add something tasty, with a great backstory, to your collection, this is a worthwhile investment if you can find it; a limited release of 3,000 bottles sold out within months. However, they have a 9-year that was released this past fall and is available for approximately $80- $100 a bottle.