Editor’s Note: This whiskey was provided to us as a review sample by Sweet Amber Distilling. This in no way, per our editorial policies, influenced the final outcome of this review.

The rumble of a stadium stack of subwoofers will shake you to the core. You know this if you have ever attended an event by any number of touring artists, even lesser-known acts in the smallest of roadside pubs across the continent. The primal nature of sound and the ability to manipulate volume has entranced man ever since the discovery of amplification techniques designed to communicate music over massive distances was made.

I was told to taste for this bombastic enrichment of sound as I was handed the bottle of Blackened for my review. Master distiller Dave Pickerell, who passed away in late 2018, was clearly aiming not only for a smooth finish, but also for a thought-provoking tasting experience: he drew so much inspiration from the dynamic depth and emotionally driven songwriting of the band Metallica that he actually collaborated with the band itself on this blend. Moved by the deep-throated rumbles of Metallica’s musical expression, Pickerell made the unique decision that this whiskey would be physically assaulted by the band’s sound during the final aging. This induction of Metallica’s vibes is meant to draw out the deeper flavors locked inside the wood by opening up the tight spaces and pores within the charred barrels, elevating the blended whiskey to deeper heights.

Pickerell, at one time the distiller behind WhistlePig, was the master behind Blackened. He picked a range of bourbons and ryes, predominately the former, from across the United States to blend. The mixture is then transferred to black brandy casks for the final aging. It is in this final process that the creative choice to blast the barrels with sound—Metallica’s sound, to be precise—occurs. The music is pumped through a proprietary Black Noise sound system to shake the barrels free of their final flavor infusion before bottling.

Does the introduction of sound make a difference? The distiller would say so. I am not going to argue with a crafter of Pickerell’s notoriety and obvious talent, but I also will not endorse that what they did was little more than speed up the aging process by shaking the liquid up inside the charred barrel. What I will say is that the end result is a smooth, unpretentious whiskey that checks many of the boxes that this reviewer appreciates in a whiskey. 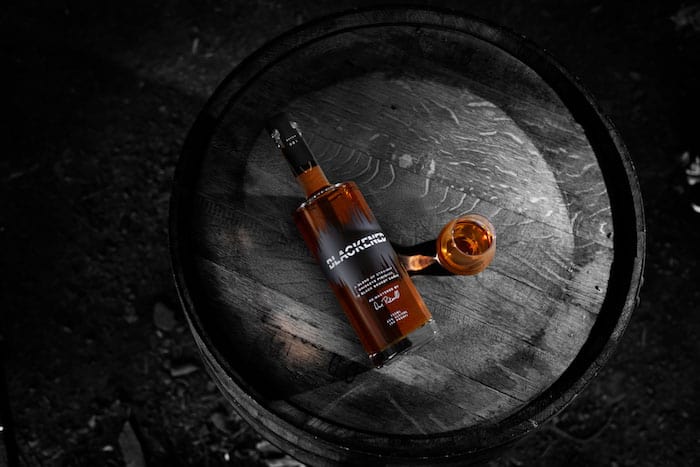 Vital Statistics: This whiskey clocks in at 90 proof. The stylish art deco inspired bottle is eye catching and has a pleasantly decorative, yet understated, label. It has a majority Bourbon makeup with the next highest percentage being rye for a mature tasting experience that does not rely on the inherent sweet profile of many bourbons to shape its pallet. Priced between $45 and $50 retail, this is a solid entry into the upper-middle tier of American whiskeys.

Nose: I found the nose to be very subtle, with some definite oaky notes and a hint of caramel and fruitiness from the brandy barrel aging that played with my nose a bit, but overall I was not blown away by the initial wafts from my glass.

Palate: With such a subtle nose, I was expecting a delicate, if not watered-down, flavor profile to greet me. To my delight, that was not the case. When drank straight, it exhibits a lovely bright citrus flavor that evokes the juice from a limón. This tangy front end was accompanied by a predominantly leathery note and a soft mouthfeel. There was a hint of medicinal or herbaceous notes that chased the whiskey off of the center of my tongue. There was also a slightly saline or mineral aspect that was intriguing and very welcome. It reminded me of an Islay whiskey infused with a hint of seaweed.

When poured over a nice big cube of ice, other flavors were unlocked and a vast landscape of tastes came forward. Caramel and spices like clove, nutmeg, and black pepper danced together for an enticing experience I would recommend to any whiskey drinker.

Whether the induction of Metallica is the keystone to the final structure of this whiskey, or if any other low frequency heavy sounds could produce the same effect, I admit that I can think of fewer ways to enjoy this drink than to throw on the double album of Metallica with the San Francisco Symphony and dive into a bottle with my musician friends to debate the collaborative genius behind it.

What is the place in musical history that a band such as Metallica holds, and how has their influence transcended the norms of music—and now the norms of how to produce a high-quality whiskey? I will leave the physics of the sound induction process up to the experts, but a good whiskey will always play nice with good music. Don’t be afraid to crank up the volume and laugh, debate, and drink the night away with a glass of Blackened at your side.