Editor’s Note: This whiskey was provided to us as a review sample by Crater Lake Spirits. This in no way, per our editorial policies, influenced the final outcome of this review.

Certain partnerships appear dubious sometimes. Who among us hasn’t looked at a couple and wondered what they see in each other? And then there’s the bewilderment when couples who we’d swear are perfect end up splitting up. You never know what’s going on with anyone, really.

But Black Butte Whiskey is one of those partnerships that seem like kismet from the get-go. Bendistillery’s Crater Lake Spirits and Deschutes Brewery, both based in central Oregon, hooked up to create Black Butte Whiskey. Crater Lake and Deschutes are relative legends out here; Deschutes has been around since 1988, and Crater Lake’s been kicking since 1996. You may also know Deschutes for its beers including Mirror Pond Pale Ale, Inversion IPA, and of course, Black Butte Porter. Crater Lake’s rye, gin, and vodkas are available in more than 20 states and are absolutely worth tracking down. (Side note: when I’m not sipping whiskey, I will often pour some of their Hazelnut Espresso Vodka over a little ice.)

So that’s the provenance of their partnership. And we’ve said before, it’s created from the wash of Deschutes Brewery’s flagship beer, Black Butte Porter. Brewpublic has a piece explains the history and process well. To summarize, the idea for the whiskey came up over conversations over beers between Jim Bendis, founder of Bendistillery, and Gary Fish, founder of Deschutes Brewery. The process goes something like this: Deschutes makes a whiskey wash and then sends it over to Crater Lake to distill and then age in new #4 char American oak barrels for three years.

Black Butte Whiskey was first released in 2016 in a limited run. The whiskey I got to review was the 2019 edition, which won the 2019 Best of Show, Double Gold at the Sunset Magazine International Spirits Competition. It’s available in house by the pour or in cocktails at all of Deschutes Brewery pubs and Crater Lake Spirits Tasting Rooms. 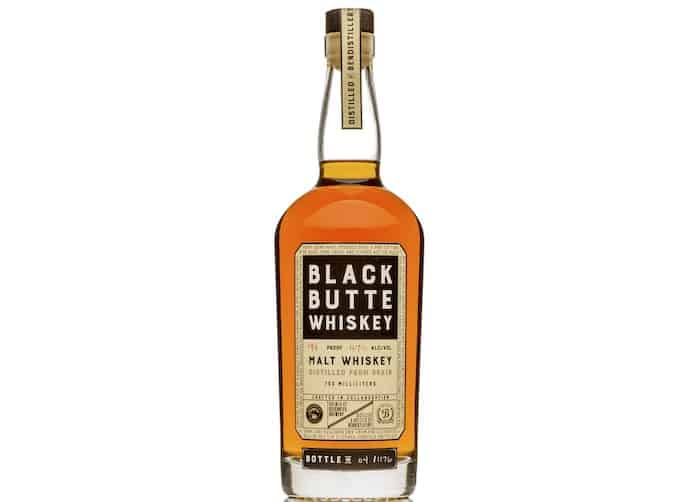 Appearance: Roasted butternut squash. Candied ginger. It’s lighter than I thought something with Porter in its history would possess.

Nose: I don’t really drink beer, but sometimes I smell my boyfriend’s beer when he orders one. This definitely has a rich, chocolate porter nose. This is engaging as all get-out, to be honest. Based on the nose, it evokes the best deepest darkest chocolate of birthday cakes. Like black forest cake, because there is a little cherry but it’s more of like rolling around in chocolate ganache. I’ll take that. Also roasted hazelnuts. I’m down with that too.

Palate: Oh…yes. That chocolate cherry chew follows through on the palate, too. This whiskey provides the best part about beer without the bloat. The flavor is fruity like dark, plump cherries at the height of the season with an overlay of the most complex, well-made chocolate. You get the desserty-ness without feeling too full. It’s well-balanced, not veering too far onto either the beer or whiskey side; it toes the line quite nicely. This is a whiskey that transcends seasons: You could drink it on the porch or in front of the fire.

If this were a perfume I would happily dab it on daily. But I get to drink it. I’m happy it exists. I’m going to snap up a few bottles of this. You should, too.