If you’ve gone to bars with large selections of whiskey lately, you have probably noticed certain brands taking up more and more real estate on the shelves. Basil Hayden’s has recently begun accumulating shelf space with its Rye, Dark Rye, Two by Two, and the 10 Year. The Basil Hayden’s 10 Year Old Bourbon, with its black bib label, has been aged two years longer than the original bourbon was before it went NAS (no age statement).

Typically grouped with Booker’s and Knob Creek, Basil Hayden’s is a high end small batch product from Beam-Suntory. Only at 80 proof, the whiskey is more gentle to sip than its high octane counterparts. Meanwhile, the extra aging of the Basil Hayden’s 10 year allows for deeper flavor and more complexity. Sadly, for no age statement fans, this expression in the Basil Hayden’s lineup is only around for a limited time.

On the other hand, for fans of rye, Basil Hayden’s is a bourbon to try because it has a high rye content compared to other bourbons. In 1796 Basil Hayden Sr. moved from the North to the South, and he set out to make a whiskey with only grains he had on hand. As a result, Basil Hayden’s whiskey making ways broke from the traditional bourbons. The decade old aging process for the Basil Hayden’s 10 year also increases those rye spices. 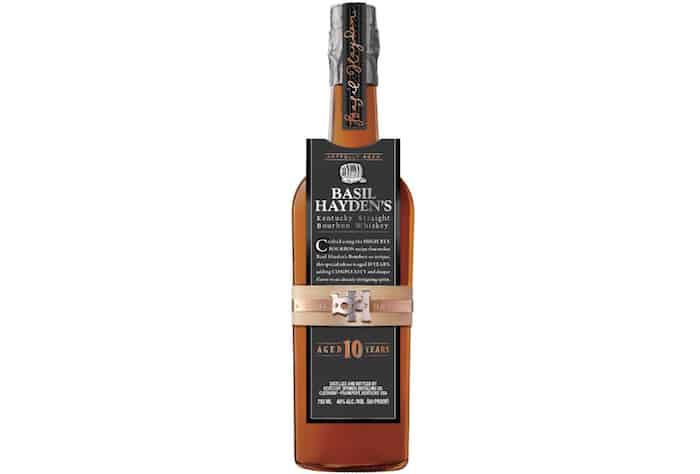 Nose: Abundant with cherry and vanilla. Sweet with a subtle touch of oak. While some bourbons smell pungently sweet, the rye spice and butterscotch of the Basil Hayden’s 10 Year are mellow.

Palate: You really get the rye spice up front that is layered with cocoa notes. The cocoa and oak mix in a dry finish giving off a coffee taste. Where the cherry was potent on the nose, it is more subdued on the palate and stays more on the breath. There is a little bit of mint that makes me want a Mint Julep. The char and smokiness from the barrel enhances the whiskey.

Basil Hayden's was one of my go to whiskies when I started drinking bourbons. I still call on it for my Manhattans when I am out. At the bar I work, we offer the Basil Hayden's 10 Year, and I recommend a flight because it is nice to see how the brand has evolved. The 10 Year is another solid whiskey, and you will not be disappointed if drinking it.

As a fan of rye whiskey, I love how the Basil Hayden's 10 Year picks up on the rye spice profile. This expression is not pungently sweet, and I appreciate the smoke and char that mingles with the classic Basil Hayden's. If you see it at the liquor store, I recommend getting a bottle before it's all gone due to its limited release.