Is there anything Barrell Craft Spirits can’t do? Since their 2013 founding in Louisville, Kentucky, Barrell has made a name for themselves as a solid blender and bottler of cask-strength whiskey and rum. Everything they release is a limited release with a flavor profile of its very own—and Armida is one of Barrell’s smaller releases, with just 3,700 bottles going out— so if you like a particular bottling, snatch more up while the getting’s good. Once it’s done, it’s done.

According to Barrell, Armida began as an experiment to seek out favorable flavors and aromas. It’s a blend of three straight bourbon whiskeys finished separately in pear brandy, Jamaican rum, and Sicilian amaro casks. Barrell Founder Joe Beatrice named Armida for his mother.

As we’ve mentioned earlier, Beatrice was “intimately involved with every step of the production process,” and developed this whiskey alongside Barrell’s Chief Whiskey Scientist and Director of Distillery Operations Tripp Stimson, as well as National Director Will Schragis, an experienced sommelier. According to Bourbon Culture, this whiskey took about a year to develop.

And if you’re really interested, an early October press release issued by Barrell teases some more details about the whiskey’s flavor profile (try reading this after you taste, so not to be too influenced. It’s like reading yesterday’s horoscope today!) 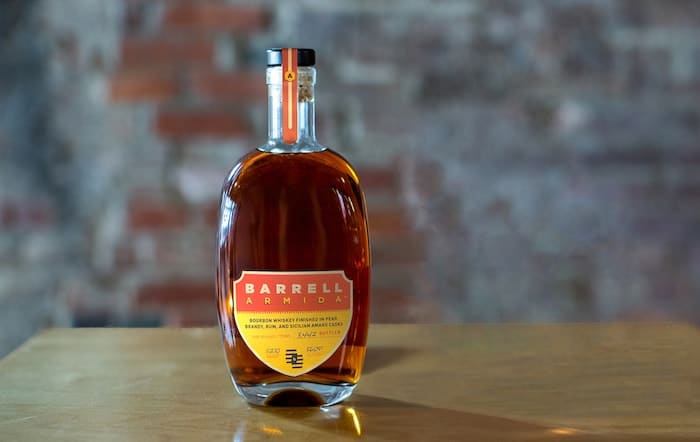 Appearance: Just peachy! Really, it does seem peach-colored in the glass, with s shade like taupe curtains mixed in. There’s nothing wrong with that. I don’t mind taupe curtains. Also, this whiskey has a high shine to it. Some whiskies look sort of dull in the glass. This does not.

Nose: Good, autumnal smells. But they aren’t punch you in the nose. The pear definitely comes through. So does fresh hay. And candied, syrupy amarena cherries. But it’s also not super-sweet. There’s fresh paper, like back in the Before Times when you could browse in independent bookstores that carried new books as well as old, much-loved favorites.

Palate: Wow there’s…a lot going on in here. Barrell is known for issuing, well, barrel-proof spirits, and this is…certainly earns its proof. It doesn’t hold a lot of sweetness on the palate, either. It is a lot more savory. It almost reminds me of a not-peated scotch. Subsequent tastes allowed me to get at some of the flavors in it, like cherry and pear again, but it’s a thinner mouthfeel than some of the other Barrell spirits I’ve enjoyed. Adding a couple drops of water brings out some maple sugar candy flavor (again with the cold-weather tastes), too.

I think this is interesting, and I was super-pumped to try it—but I don’t love it. I know Barrell can do fantastic things. I wouldn’t call this one of them.

I wanted to like this but couldn’t find my way there. If you like unusual whiskies and one-of-a-kinds, certainly you should go out and get it. You can’t go wrong, but I wanted more. Maybe because this isn’t a comforting whiskey. It’s weird. A little wacky. And you know what? I’m kind of done with odd surprises, at least for the time being.