Canadian whisky aficionados might consider this spirit to be the unsung hero of the whiskey world, as it has received comparatively less attention than its regional counterparts. And it isn’t for lack of historical presence or prominence – whisky has been produced in Canada since it arrived with colonial settlers, and today is one of the country’s major agricultural products and exports.

In 2012, Davin de Kergommeaux – largely considered to be the foremost expert on Canadian whisky – published the award-winning Canadian Whisky: The Portable Expert. In the fall of 2017, a revised and updated edition was published (Canadian Whisky: The New Portable Expert). According to the publisher, this well-produced updated edition is “newly designed” with added features including “a map of Canada’s whisky distilleries, over 100 up-to-date tasting notes, and a handy tasting checklist.” 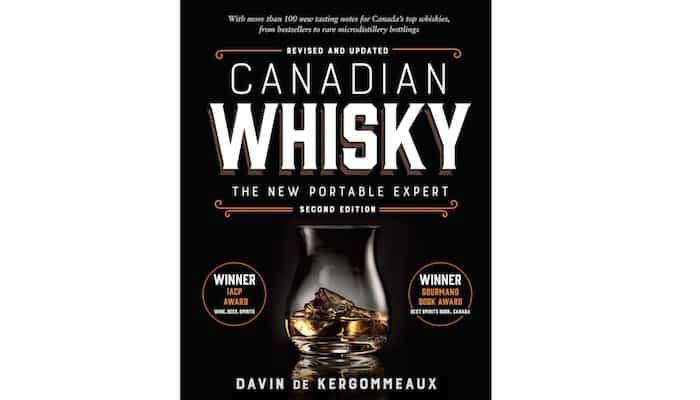 de Kergommeaux argues that “the most important ingredient [in whisky] is the story.” And, fittingly, his book is highly readable – both entertaining and educational. I strongly agree with the sentiments expressed in The Whiskey Wash’s review of the first edition, in that it is rather an ode to Canadian whisky. It introduces and offers readers a deeper dive into the history, production, trends and primary distillers of Canadian whisky, peppering throughout some lesser-known details and insights and calling out common misconceptions.

The level of detail offered in the book goes into great specificity – from the basics of Canadian whisky, like the particulars of different grain varietals and other materials central to production, to a remarkable amount of detail on both the history and the “eight distillers of traditional Canadian whisky” (the latter and a historical overview of Canadian whisky are the two meatiest and most extensive portions of the book). The book also includes informative breakdowns about the “pleasures” of whisky, including suggestions on how to train and advance one’s palate.

I appreciated learning about the nuances and influences shaping Canadian whisky, which was essentially born of a desire to do something both creative and functional with the country’s natural resources, making the most of what existed (from water, to grain crops, to wood). de Kergommeaux’s explanation of the economics of whisky in Canada, and why and how it shapes production on a broader scale – from volume produced, to what ultimately ends up in a bottle – was helpfully explained in layman’s terms. As a citizen of Canada’s southern neighbor, I also enjoyed discovering the interesting interplay between Canadian whisky and American whiskey, especially around several key historical moments in time (wars, Prohibition). It makes sense given proximity and our own country’s complicated history with alcohol, but this wasn’t a story I previously knew.

Overall, Canadian Whisky: The New Portable Expert offers a discerning look at Canadian whiskey, albeit perhaps not a critical or neutral one. And, at least for me, this is not a bad thing. As someone who admittedly has not had extensive exposure to Canadian whisky, I got what I hoped for from this book: interesting historical intricacies of what Canadian whisky was and what influenced where it is today, and expert insights on a variety of bottles that might pique my interest further.

While there is a linear narrative throughout, this book does well leafed through and read piecemeal, depending on what one is interested in learning about. It’s not quite sweeping nonfiction, nor is it a dry reference book — it’s an appropriate hybrid of sorts. I also enjoyed de Kergommeaux’s tasting notes peppered throughout the book. Given his wealth of knowledge on the topic and such an advanced and experienced palate, I can see myself picking it back up from time to time to compare notes, so to speak, or gifting a copy to a fellow whiskey enthusiast.

22
Shares
193
Views
Share on FacebookShare on TwitterGet Our Newsletter
Get The Macallan® Rare Cask at ReserveBar. Shop now!