Editor’s Note: This product was provided to us as a review sample by Spiritless. This in no way, per our editorial policies, influenced the final outcome of this review.

I am currently drinking the first non-alcoholic mint julep I’ve ever had. Well, actually there’s a little whiskey in it, but a lot less than you’re typical horse race betting style of julep…

That’s because the mint julep in my hand has 1.5oz of a new “non-alcoholic bourbon” called Kentucky 74. It’s made by a company called Spiritless with a realistic approach on the market of non-alcoholic beverages. Three entrepreneurs with careers in the hospitality world were tired of not having thoughtful, tasty drinks for those who didn’t want to get drunk. They explicitly say they aren’t trying to replace bourbon – they would sooner sell their souls I think!

The founders of Spiritless – Lauren, Abbey and Lexie – are all cocktail drinkers and lovers of a good manhattan. Kentucky 74 is just another option that was greatly needed in our world of imbibing. 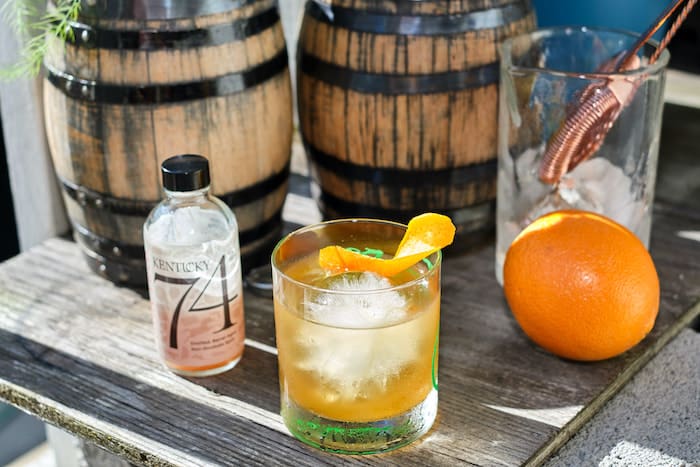 Spiritless claims Kentucky 74 to have all the taste, mouthful and approach of a real whiskey, but without the alcohol bite. The most important thing about this product is that they acknowledge that right from the start. There are several great non-alcoholic spirits out there now, including whiskey like products. I have only had a couple of them, but have had them on cocktail menus I’ve worked with in the past. I appreciate this category in a big way and realize its importance.

However, most struggle to sustain the ‘thingingness’ that a true alcoholic spirit brings to a drink, do you know what I mean? They can taste flat and boring, failing to stand up to other ingredients. While I’m not claiming Kentucky 74 should be a sipper for the whiskey connoisseur, it does a great job of landing the flavors and feeling you need when you mix it into a cocktail.

I said it’s important that the folks from Spiritless are fully aware that this doesn’t replace bourbon – it instead creates a possible alternative to it. It’s this expectation that makes this product so great. After watching their marketing video (bravo, by the way) I knew exactly what I was getting into. And I even followed their suggestion and made my second cocktail (this julep) with a bit of whiskey in it.

Why? Well, I first tried an old fashioned that used Kentucky 74 instead of whiskey all together. While acceptable, it was my first beverage of the day and it didn’t quite do it for me. Fast forward to now – I just finished a work out and wanted to keep my cocktail light, and this mostly alcohol free cocktail is just perfect! Exactly what I wanted. Thank you, Spiritless!

This situation is what they are going for. They want you to be able to choose your own adventure without having to guzzle down a hundred sodas and lime like you’re 19 at the one underaged bar in town again. If you have any reason to take it easy or avoid alcohol, it shouldn’t interfere with you having a good time.

We can all relate, and now we can all forget about it because Spiritless Kentucky 74 has created a solution.