The Pacific Northwest is known for market saturation in both the coffee and craft distilling industry. To my surprise, few distillers have been able to crack the code of blending coffee and whiskey in the way that Mr Black has done. Although the product is not a whiskey, it is aged in rye barrels and for my money, that was an excellent decision. The result is a spirit that is versatile enough to be drunk on its own, or in a myriad of other combinations.

Mr Black is based out of Australia, where a love of coffee is a cultural distinction rivaling any other coffee-focused societies. Established in 2013, Mr. Black put its focus on a cold brew and vodka combination that defines its signature vodka-based coffee liqueurs. The story goes that during a meeting between the owners of Mr Black and Whistle Pig, it was decided that aging the cold brew liqueur in whiskey barrels would yield a product that benefits from the positive attributes of both. An agreement was struck, and barrels were shipped from the Whistlepig facilities to Mr Black’s Australian distillery, where the aging took place. What we, the drinkers, now have is a well-crafted and thoughtful coffee liquor with the robust hints of rye that elevate the established coffee notes with an inviting and boozy kick. 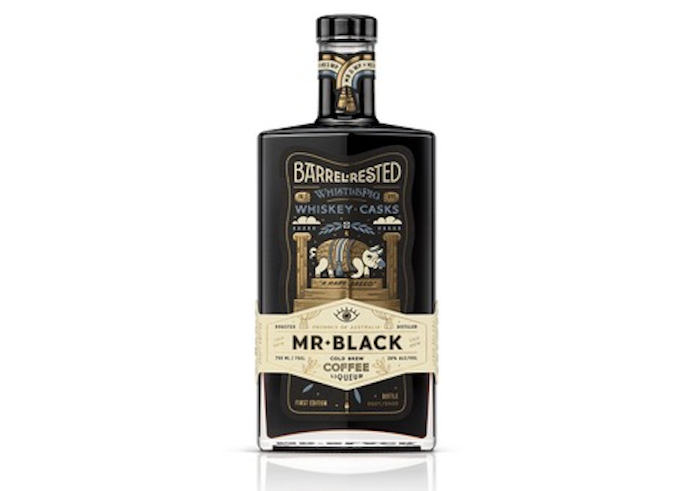 Appearance: Black coffee with a sheet like viscosity on the side of the glass.

Nose: Iced coffee hits first. There is a sweet quality to the smell, but it doesn’t overpower or come off as artificial. There is a hit of black licorice followed by faint vanilla note. The nose is finished off with just a hint of oak.

Palate: Like a properly mixed Irish coffee, the rich coffee notes hit first. Dark, bitter chocolate and a bit of dried cherry accompany the roasted bean notes of cold brew coffee that is the base of this drink. It is not burned and not overrun by artificial flavorings. The bitter is balanced out by a soft honey sweetness. There is also a whisper of smoke that brings out the roasted nature of the coffee beans. The heat is subtle. Anise and clove provide a licorice note. If you are not a fan of sweet in your coffee, I recommend an ice cube. When chilled it leans towards a creaminess like a latte.

This liqueur raises the bar for me on coffee flavored spirits. It leans on the coffee and whiskey combo without being cloyingly sweet. It stands well on its own, over ice, or could easily be incorporated into a mixed drink, or deserts such as Tiramisu or simply poured over a scoop of ice cream. I would never have thought I would take my palate all the way to Australia to find such a delightful entry into the flavored spirit market.