Editor’s Note: These whiskeys were provided to us as review samples by First Light Coffee Whiskey. This in no way, per our editorial policies, influenced the final outcome of this review. It should also be noted that by clicking the buy links in this article our site receives a small referral payment which helps to support, but not influence, our editorial and other costs

Coffee liqueurs are not new. Most cultures have an iteration of this sweetened tincture. Often you will find them adorning a menu as an additive to a cocktail such as Kalúa in a White Russian, or as a novelty spirit offering from an independent distillery. It is a way to play with flavors and to enhance a spirit of lesser quality through the infusion of strong flavors to mask the young nature of the liquor.

First Light Coffee, a young company out of the San Diego area, takes a slightly different approach, anchoring their branding in their premier coffee flavored whiskeys. They have released two iterations of their coffee infused spirits – Original and Dark Roast – in hopes of invigorating their brand and the market with a fresh take on a classic combination.

Started by cousins David Elizondo and Ryan Espinoza, First Light Whiskey’s YOLO fueled marketing is geared to put a young face on the whiskey market. Their formula utilizes corn-based whiskey, allowing for a shortened aging process, and then diluting it with coffee flavoring and agave.

So, what works for these whiskeys and what doesn’t? 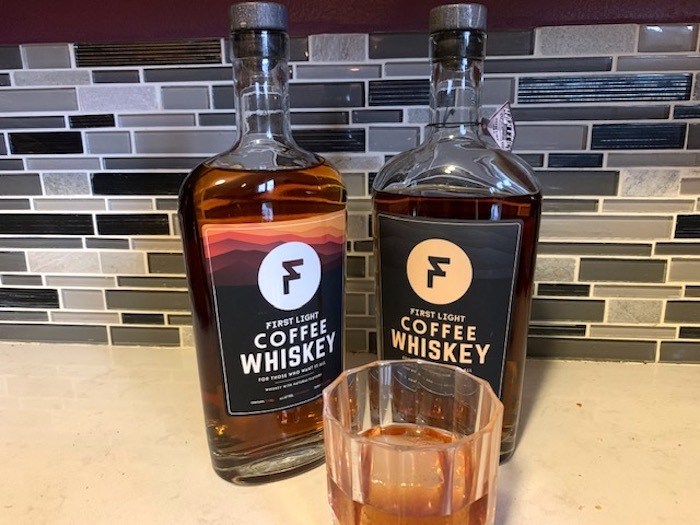 Vital Stats: The Dark Roast blend has an ABV of 33%. mix of organic raw agave and coffee extract with corn whiskey. priced at $28.

Appearance: It has a darker hue of orange tinged amber

Nose: As expected, coffee shines forth as a dominant note but is overwhelmed by the smell of cane sugar. There is a bit of red apple that sneaks in but no other dominant notes to speak of.

Palate: Sugar. This whiskey is sweet. It reminds me of when I was a kid trying to appear older by ordering a latte, then upending the sugar dispenser into it until a mountain of sugar granules formed beneath the swirl of milk and coffee. Coffee is in there but veiled by the heavy sugar notes. It is not a very warm whiskey, but a gentle warmth does coat the tongue and throat as you sip.

Final Thoughts: Why make a coffee flavored spirit if you don’t like the taste of coffee? If anything, this is a whiskey that works better as an element in a cocktail, but I would not recommend it as a stand-alone drink unless you have a serious sweet tooth.

Appearance: It has a lighter amber color.

Nose: Where my nose was assaulted by the sugary notes of the Dark Roast, I had the opposite experience with the Original Whiskey. There was little to no smell present. It was like standing across the street from a coffee shop and catching the hint of dark caffeinated concoctions blown over by the wind.

Palate: This had a pleasant coffee flavor, like a nice French press with light cream. Cane sugar is there but not nearly as overwhelming as the Dark Roast. There is more heat present, but it isn’t obtrusive. After a drink you are left with an aftertaste of coffee.

Final Thoughts: This is drinkable by itself or with a nice big cube as an after-dinner drink instead of or in addition to a desert. I appreciate the intent behind this one. Their coffee flavor is solid and the drinker does not get distracted by the sickly sweet notes of an overly sugared specialty drink from the barista with too much time on their hands.