From a clerical mistake that changed the original owners name from Heavenhill to Heaven Hill, to a massive fire that decimated 15% of their whiskey stores, Heaven Hill Distillery has a storied history. Surviving prohibition, Heaven Hill distillery thrived and grew over the years with such talents as Parker Beam behind the helm. They have a varied selection of labels including Elijah Craig and Larceny, and they continue to deliver consistent and high-quality whiskeys to the world.

Old Fitzgerald Bottled-In-Bond is released every Spring and Fall as a limited batch. The 2021 Fall Edition, adorned with a black label like previous Fall releases, ticks all the boxes that a bourbon drinker will be looking for. It is aged 11 years and encased in an elegant bottle modeled after a 1950’s style decanter. Originally registered in 1884, the original Old Fitzgerald brand was sold off to “Pappy” Van Winkle during prohibition. When Heaven Hill Distillery changed hands in 1999, it reacquired the Old Fitzgerald label and began distilling and releasing it as a limited Bottled in Bond release.

Heritage whiskeys like these toe the line of tradition and innovation. Their namesakes hearken back to days of yore, but with modern advancements and the ability to distill upwards of 59,000 barrels of whiskey a day, is that legend little more than nostalgia? 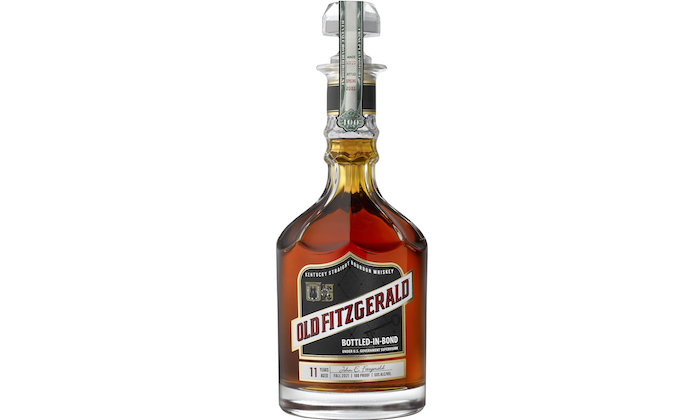 Appearance: Light shines through the amber coloring. The whiskey falls down the side of the glass in a sheet, with even viscosity.

Nose: The first notes to hit my nose are butterscotch and brown sugar. These are followed close by the spicy flavors of cinnamon and white pepper. It has a hint of citrus, fig, bread and malt to round out the nose.

Palate: When it hits the tongue it has a surprisingly medicinal quality. Heat is present from the front to the back. Sweet notes of brown sugar that verges on salted caramel pop first. It has the bright and spicy character of white pepper and clove, with cinnamon barely coming through. On the back of the palate, it leans into flavors like leather, vanilla, and oak. Its sweet character is a bit like cough medicine, which is especially present in its aftertaste. The heat is a bit distracting but not unexpected for the 100-proof bottling. It’s not as smooth as I would expect from an 11-year-old whiskey.

For my tastes, this bourbon, although ticking many of the mid- to upper-mid level whiskey boxes, does not deliver past the nostalgic notes of its name. it is a decent sipper and over ice delivers a traditional bourbon experience, but for the price point, it does not warrant the cash outlay for me personally.