Editor’s Note: This whiskey was provided to us as a review sample by New Liberty Distillery. This in no way, per our editorial policies, influenced the final outcome of this review. It should also be noted that by clicking the buy link towards the bottom of this review our site receives a small referral payment which helps to support, but not influence, our editorial and other costs.

The Kinsey brands are part of Philadelphia-based New Liberty Distillery, which was founded by Rob Cassell. When we wrote about him back in 2018, he was in the midst of simultaneously getting New Liberty running in Philly and an Irish distillery, Connacht Whiskey Company, in Ballina, Co. Mayo, off the ground. (The two distilleries are not financially connected.) New Liberty was established in 2014 and has been championing the revitalization of Pennsylvania whiskey, as Craft Spirits writes.

And as we have reported before, New Liberty was also inspired by the days of long ago when rye was the most popular spirit in the U.S. and spirits were distilled with local grain. Their whiskeys, where possible, include local grain from a farm located only 25 miles from the distillery. Kinsey also proudly acknowledges little-known whiskey facts: American whiskey reportedly began in Pennsylvania—not Kentucky or Tennessee—where Kinsey was born in the 19th century.

The Kinsey Chardonnay Cask Whiskey was the second of their new offerings I reviewed; the first being their Kinsey Straight Wheat Whiskey, which I adored. The Chardonnay Cask is…just that. This whiskey was developed when a barrel of the finest French wine was sourced and shipped to Philadelphia to be filled with New Liberty Distillery’s Kinsey American Whiskey.

The base is Kinsey American Four-Year Whiskey aged in California chardonnay barrels for approximately one year, with a mash bill of 99% corn and 1% malted barley. 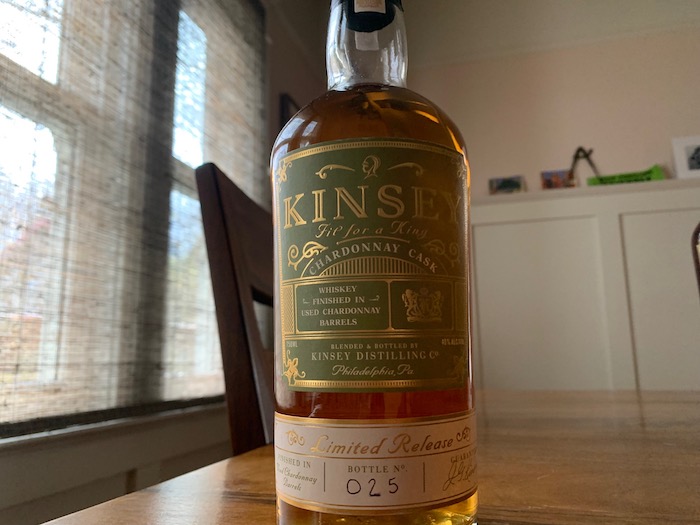 Appearance: Much lighter in the glass than I was expecting. I guess it is lighter than the straight wheat whiskey when I put them side by side, but in the glass it’s like a light gold. Maybe a low carat gold, but still shiny.

Nose: Like its sibling, this nose is also subtle. But there’s definitely a nasal echo of the chardonnay cask in which it once dwelled. It’s chardonnay and oak and also cream and butter. This whiskey is very dairy-forward—and that’s something I don’t think I’ve ever noted in a whiskey. But it’s in play here.

Palate: I kind of like this, but it is a little weird. It is strongly wine-ey, but not like an acidic wine, it’s like a creamy chardonnay and a whiskey met at a wedding and nine months later this concoction showed up. It’s smooth AF. I like this precisely because it’s not your typical whiskey and that’s totally fine. I want to rate this between 3.5 and 4 stars, it’s really like a 3.75, in my opinion. But in the absence of splitting whisky hairs I’ll go with a 3.5–but if you like wine, especially weird wines, it’s more like a 4-star.

Open this bottle and pour yourself some of the whiskey knowing it’s not something you grab off the shelf and toss into a cocktail. And doing that with this whiskey would be kind of a waste, anyway.