Editor’s Note: This whiskey was provided to us as a review sample by New Liberty Distilling. This in no way, per our editorial policies, influenced the final outcome of this review.

Philadelphia’s New Liberty Distilling, known for its variety of award-winning spirits under the helm of co-founder, master distiller and industry vet Robert Cassell, has. among its various product lines, revived the heritage Kinsey brand as one of its featured series of spirits.

“When folks think whiskey, they think Tennessee or Kentucky. But the story of American whiskey began in Pennsylvania, where Kinsey was born in the 19th century. Kinsey is a homage to our original distillery along the Schuylkill river, which once held the world’s largest collection of aging whiskies. A time when Pennsylvania was synonymous with good whiskey. A time when Kinsey was king.”

The mainstays of the Kinsey line, all of which are sourced, are a bourbon, a rye and an American whiskey (all previously reviewed by The Whiskey Wash). Following two limited edition expressions of the Kinsey American whiskey, including a Merlot cask release, comes a third special bottling: Kinsey Cabernet Cask. For this expression, a 10 year old Kinsey American Whiskey (100% corn mash bill) was finished in 53-gallon wine barrels that previously held Napa Valley Cabernet wine in California.

Here, we tasted bottle number 510 of this limited release. 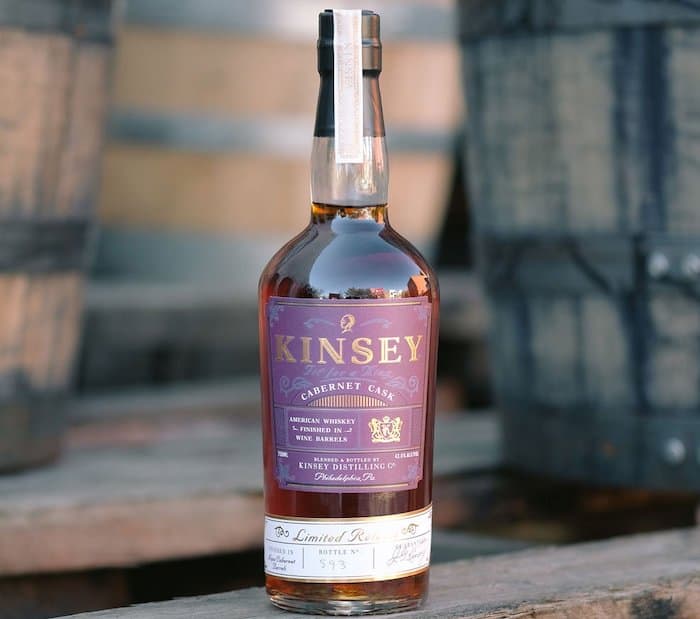 Palate: Warm, luscious and smooth. Slow-cooked stone fruit, black currant and berry flavors – likely imparted by the Cabernet casks – are balanced with a sturdy and savory foundation and a drier finish, which is marked by a little burst of peppery spice and a lingering subtle rumble of warmth.

Impressive. While generally an optimist, I’ve been let down a number of times by enticing-sounding spirits and beer that have been creatively aged/finished. But Kinsey Cabernet Cask did not disappoint. The Cabernet finish didn’t overpower, but rather enhanced the whiskey. We enjoyed it best sipped neat.