One Man, One Ocean, Two Whiskey Distilleries: An Irish And American Tale

Rob Cassell is a very busy man. Not only is he running two new distilleries, training two sets of distillers, breaking in two new sets of equipment (equipment he designed and shepherded through engineering and production), and developing two lines of products, the distilleries are on two different sides of the Atlantic Ocean.

“I got my work ethic from my father,” he said. His father must have been a whirlwind. In a two-hour interview, Cassell sat still for maybe 35 minutes, 20 of which was during lunch. We were at the first of the two distilleries, New Liberty in Philadelphia. New Liberty is surrounded by construction and renovation, right beside the city’s North American Street Corridor project, a massive remaking of this ragged street into a green boulevard.

Cassell’s work got this industry off the ground in Pennsylvania. “I lobbied for seven years for the limited distillery license,” he said. The license is lower cost than a full-scale license, with a 100,000 proof-gallon annual limit. It also allows on-premise sales (both retail and by-the-drink) and five satellite stores anywhere in the state. It’s been a bonanza for distillers; the state went from three to 82 distilleries in the 18 months after it passed.

Cassell’s not a lobbyist, he’s just persistent. “I called representatives and senators every day,” he said, “I met with them, talked with them about how this could start small, tax-paying businesses, help Pennsylvania agriculture. I compared our laws to other states’ laws.” He also helped start the Pennsylvania Distillers Guild, all while working full-time at Philadelphia Distilling before opening New Liberty with his partner Tom Jensen four years ago. 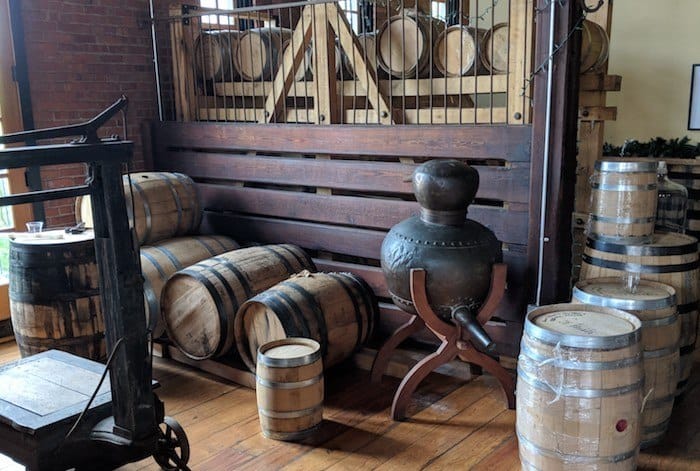 New Liberty runs on a Specific Mechanical still. That’s the first Specific still I’ve seen; I’m more familiar with them as a brewery fabricator. But it reminded me of a system from about 20 years ago, the Bohemian Monobloc. Everything sits on a steel frame, and is delivered in one shipment: the lines for water, steam, and wash are already plumbed in, ready to connect.

Cassell helped design the still. “It’s designed for a lean start-up,” he said. The still will get a new distiller up and running in a short time, at a bargain price, and is scaled to come in just under the next-larger class of still, where fees (and insurance rates) climb steeply. That’s the kind of thinking and innovation you get from an early adapter in the craft distilling game.

The Irish distillery — Connacht Whiskey Company, in Ballina, Co. Mayo — is not financially connected to New Liberty. It’s a separate business that also has Cassell as master distiller and Tom Jensen as partner. “About six months after we opened here,” he recalled, “P.J. Stapleton and his cousin (Irish native David Stapleton) approached us about doing an Irish whiskey company.”

PJ Stapleton, the former chairman of the Pennsylvania Liquor Control Board and an experienced lawyer,  got Cassell and Jensen (also an Irish native) on board. Then he and his cousin planned out the whole business during a four-hour drive to meet with Irish ministry officials about the distillery license.

Doing a remote buildout of distillery is hard enough, and Cassell’s in Ireland two or three times a month, driving straight to the distillery, working 12 hour days, and heading right back to the airport. “I still haven’t seen much of Ireland except that drive,” he admitted.

But when the distillery is in rural Ireland, it brings additional challenges, like three-week waits for parts. “It was a standard pump part,” he said, frustration clear in his tone. “I got the specs, went to the supply house here in Philly and got it right off the shelf. I wrapped it up in my suitcase and headed to Ireland. Sometimes you have to.”

The plan for Connacht is similar to New Liberty. There are vodkas in both portfolios, the gins already mentioned, and some specialty spirits at each place, like the Strawboys Poitin at Connacht. But the main plan at both is to be a whiskey distillery, and the main market for both is the U.S. There simply aren’t enough customers in Ireland to sustain a new whiskey distiller; Irish whiskey has always been to a large extent an export product. Cassell and the Stapletons realized they needed an edge.

“When we started planning Connacht,” Cassell explained, “all Irish whiskey came from the same four distilleries. There were new distilleries being built, mainly to make more of those same kinds of whiskeys, and it was clear that there was going to be a lot of commodity Irish whiskey on the market. We’re not doing that; we’re looking for a different area to paint.”

How different? Among other things, Cassell and his head distiller at Connacht, John Park, are doing a triple distilled whiskey with a sour mash, an Irish malt whiskey, a double-distilled spirit done with a tight hearts cut, and a triple distilled spirit done in the “queen’s cut” style, redistilling the tails runs. They’re also paying local foragers — “That’s a real, full-time job in Ireland!” Cassell said with astonishment — to collect botanicals for their Conncullin Irish Gin.

They’re doing some sourced whiskeys at both distilleries for now, but he doesn’t want to bottle anything under four years old. Look for Connacht Irish whiskey in 2019. “Irish whiskey, from an independent, real place,” Cassell said, and laughed. “People don’t expect this.”

It’s been a hard run the past four years, but he has the team at Connacht trained to the point that they can run things on their own. With both distilleries running well, he’ll be looking for ways to innovate and fine tune.