Book Review: The Terroir of Whiskey

Editor’s Note: This book was provided to us as a review sample by the author. This in no way, per our editorial policies, influenced the final outcome of this review. It should also be noted that by clicking the buy link towards the bottom of this review our site receives a small referral payment which helps to support, but not influence, our editorial and other costs.

Terroir. No, not terror, but rather the most recent term emerging in the whiskey industry. With its beginnings in the wine industry, terroir describes the impact of soil, microclimate, and topography on agricultural crops. Terroir had never been a forethought regarding whiskey because it is believed distillation removes it or cask aging masks it. But to distillers steadfast in finding the truth, terroir is finally proven with the aid of barley scientists at Oregon State University.

Over at Firestone & Robertson Distilling Co., Head Distiller, Rob Arnold wrote about his quest to understand and demonstrate that terroir is meaningful to the whiskey industry. Intricately written, The Terroir of Whiskey delves deep into the subject. While it breaks down into the science and technical aspects, the writing remains coherent for readers.

At the distillery, Arnold was to isolate Texas indigenous yeast strains. This led to an all-out obsession with terroir. Only a handful of distilleries are taking the risk by using low-yielding grain crops to experiment with terroir. Arnold visited New York, Kentucky, Ireland, and Scotland, which he deems, the “four headquarters of distinct styles founded on cereal and place.”

A few distilleries in New York established a new style of whiskey known as Empire rye. They set their own standards, which requires 75% of the grain bill be New York rye to highlight the terroir of their state. Distilleries in Kentucky mainly use corn grown out of state to make bourbon. That is until a few farms decided to grow locally. 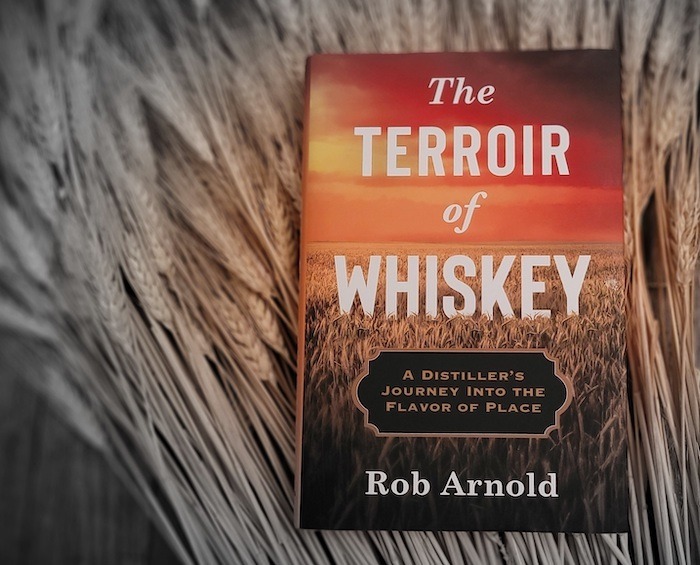 The Terroir of Whiskey (image via Courtney Kristjana)

Across the pond, Arnold visited Bruichladdich in Islay. He initially thought their approach to terroir was more philosophical than scientific. However, the trip proved to be enlightening. Arnold finds the most important aspect of terroir is “something rooted in the connection between the people, the land that they nurture, and the whisky they share.”

Mark Reynier founded Bruichladdich. He left Scotland for Ireland to make single malts founded on the principle of terroir. Rob Arnold made a stop at the Waterford Distillery, where Reynier’s vision and passion for terroir seem almost overwhelming. Every season the distillery partners with 40 to 70 farmers; each with a distinct type of soil. Waterford Distillery has been a maverick in proving terroir is real. They have teamed up with scientists to form the Whisky Terroir Project to show that terroir “exists in whiskey but that its existence is profound.”

The Terroir of Whiskey has many accompanying charts and tables. Overall, Appendix 1 is the real reason any whiskey drinker will want to buy the book. Appendix 1 is a detailed whiskey terroir tasting guide. Arnold also provides five flights to demonstrate terroir. Whether or not you believe you can taste the terroir in whiskey, Rob Arnold’s anecdotal and scientific book, The Terroir of Whiskey, is a must-read. It is by far one of the best books I have read about whiskey. In Arnold’s conclusion, it is apparent that every distillery he visited has specific reasons for experimenting with terroir. The taste of whiskey is a glorious thing, and the proof that terroir exists in whiskey is going to change the industry and our palates forever.

Buy a copy of The Terroir of Whiskey on Amazon