Vermont based WhistlePig and its master distiller Dave Pickerell have been on a roll of late with the release of new whiskeys and the recognition from the industry and beyond they are producing some award winning spirits. There was, for example, the release of Farmstock earlier this year, which is the first expression from them to contain a percentage of their own in-house distilled spirit in the blend (to date all WhistlePig products have been first sourced from MGP or Canada before being played with at the distillery). And, coming to market just now is the next release of Boss Hog, known as the Black Prince, which recently was named best whiskey in the world at a prestigious spirits competition. Oh, and it will also sell for at least $500 a bottle!

To get up to speed on the latest happenings at WhistlePig, we sat down at the recent Tales of The Cocktail conference in New Orleans to speak with Pickerell. Note this interview is edited for clarity and brevity. 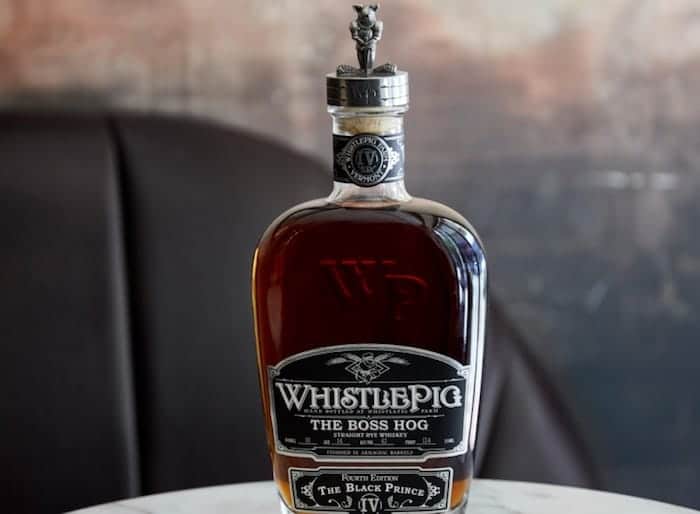 The Whiskey Wash: So we’re here with Dave Pickerel of WhistlePig. Thanks for taking some time to join us for this interview Dave.

Dave Pickerell: It’s good to see you. Thanks for taking the time.

TWW: So last time we talked you were getting WhistlePig up and running and you’ve seen some successes with the distillery particularly in the last year or two. Talk a little bit about what have been some of the major milestones for WhistlePig in recent times.

Pickerell: The first one is we finally crossed all the hurdles at the state level. It took four and a half years for them to decide we were an agricultural product and to allow us to do the build out. We got [the distillery] built, and now for the last about 21 months we’ve been running as hard as we can run a distillery. And so we have our own still, which is the biggest news. Second news is that we’ve started using [Vermont oak] wood from our own forest to age our spirits. Then I think Old World had already come out and now Farmstock Rye is a fairly new release.

I’ll take just a second here on Farmstock. You know, people know that we’re running our own still now. And they’ve been asking “when do we get to taste your own juice?” Everybody knows we’ve started with some spirit from Alberta. Our 12 year old came from MGPI. And now we’ve got our own in house spirit. So we’ve got three different groups of spirits. So what we’ve released is Farmstock Rye Crop One, which is really significant. It is 20% made from our spirit in house that’s a year to 18 months old. Then the next 49% is Alberta spirit, that’s aged five to six years, and then the last 31% is MGPI 12 year old.  The idea is to give you all something that’s holistically delicious but where you can still taste the individual components, because I want people to tell you there’s some grainy citrusy notes from the young grain.

I want someone to say there’s that traditional caramel, butter scotch and a long finish that we’re known for so well. And some of the big oaky hints that you get from the new wood. The other thing that’s really fun is on the big bottles is the finger print [which] tells you where every drop of spirit came from. Everything that I just told you is on that table. And this is our attempt first of all to be transparent ourself. Second of all to encourage transparency on the part of other distillers. Because there’s big distillers and little alike, it’s rare when you actually truthfully know exactly what distillery all of the juice came from and so we want to just stand out as an example that it’s okay to do that and the customers are fine with it.

But obviously if we have Crop One, it means there will be a Crop Two. So the elegant solution is set a bottle of Crop One back. And when Crop Two comes out it will be a little more in favor of percentage wise our in house spirit at an older age, and then Crop Three and so on until it’s eventually 100% our product at the age that we want.

TWW: And when is that moment you think?

Pickerell: When it’s ready. That’s just kind of my style – we won’t get there til we get there.

[With regards to other things going on] this is the last thing we’ve got, and honestly this one is a pride and joy. Is that we’re just getting ready to release 2017 Boss Hog, The Black Prince. And the Black Prince is a 14 year old whisky finished Armagnac casks.

Pickerell: 14 year old MGP finished in Armagnac casks. The San Francisco International Spirits Competition gave us the unbelievable honor of being the best whiskey in the world. I’ve had whiskeys’ be the best in their category, the best in United States, best in North America, best in Western Hemisphere, but I have never beaten all the Scotch before. And so this is particularly gratifying to see our team come together and be able to put such a marvelous product out.

TWW: So with Boss Hog, you’re on four releases now?

Pickerell: This is the fourth, yes.

TWW: And the price on each one’s been creeping up a little bit.

TWW: And this one’s gonna be around?

Pickerell: Around $500 shelf price. It’s illegal for us to set shelf price. So we can suggest, but that’s all we can do and we hope that it is. And kind of the thought process is, there’s a point where the shelf price is enough so that people that really want it to taste it can have it, but it gets to the point where people that just want to buy it and resell it don’t see the value in it. And we’re just trying to cut off that goofy secondary market. We want people that really want to enjoy it to have it. Part of it as well is it’s just expensive to do.

TWW: Why is it expensive to do?

Pickerell: Getting the Armagnac casks is a really expensive deal. And so it was more expensive than most of our finishes because there’s just not a lot of Armagnac casks available in the first place, which means that our supply is not as big as I would like for it to be.

TWW: So how much is going to be available?

Pickerell: I’m guessing it’ll probably be around 6,000 bottles or so.

TWW: And when is that due out?

Pickerell: We’ve done a sneak peek review in a couple of markets, just to tease it up. Chicago I think already got some. I think New York got a little bit. And then maybe San Francisco.The major release will come out September, October time frame.

TWW: Let’s talk a little bit about the Armagnac barrels. That’s a very unusual barrel type to finish whiskey in. What is about Armagnac that works with whiskey?

Pickerell:  Well in our particular case, I don’t think it’s necessarily all whiskies, we don’t have that back palete grip. The tannins. That’s one of the note worthy things about WhistlePig is the absence of tannin astringency. And I think that’s a good measure of why the Armagnac works so well with it because the whiskey doesn’t have a backbone of tannin. And frankly a really good friend of mine loves Armagnac and I was acquainted with some of the delicacies of Armagnac and thought we at least need to try this.

TWW: [Looking  a little more broadly now] WhistlePig’s focus seems to have always been rye. Why is that, and do you think you guys might branch into other types of whiskey at some point?

Pickerell: It was because of my passion for rye. I want to make the best rye whiskey we can possibly make. And then to own that category. And that’s what our focus has been. Now we’ve essentially done all those things. We created the sub category rye whiskey over six years old. We’re clearly the dominant in that category. And essentially own it. There’s just not much else out there that’s over six years old. And we’re cementing our position. It would make sense that we should branch out beyond that at some point in time.

There are some people that expect that I’m going to release a bourbon. Just because I’m fairly well known for bourbon. There are other folks that would rather [have us] focus our energy on getting to a cocktail friendly priced rye. And we’re in no big hurry because we’re pretty much selling everything we make that’s available anyway. We’re not in all 50 states yet. We’re not really substantially exported. So we’ve got a long way to go yet, and so I’m not in a big hurry to make the decision.

TWW: Last question. So right now you’re obviously starting to mix the sourced rye with your rye. Will there be a point where we’re just seeing 100% WhistlePig distilled product? Or do you think there will always be something that’s mixed in from somewhere else?

Pickerell: What I’ll say is certainly Farmstock Rye will eventually be 100% WhistlePig. I am a really pragmatic person. I’ve got to keep my finger on the pulse around source whiskey. Because if the brand continues to grow at the pace it’s growing we don’t want to limit ourselves by our ability to produce. And so until I’m sure that we can produce all of our demand, I’m not going to cut off my source whiskey.