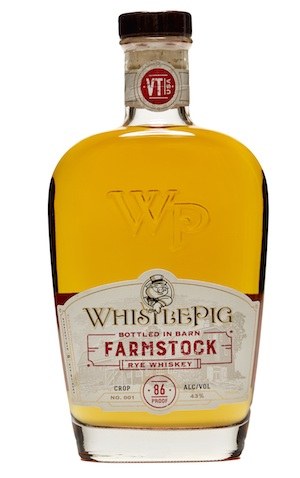 This March, Vermont’s WhistlePig released Farmstock, a blended rye whiskey that they are cleverly calling the “world debut of triple-terroir whiskey.” WhistlePig founder Raj Peter Bhakta has been eager to express whiskey through the terroir of his Vermont farm and distillery. Everything from the Vermont rye to the Champlain aquifer water come from the farm, even the Vermont oak used to create WhistlePig’s in-house cooperage.

The whiskey in this bottle, however, is not 100% farm native. Bhakta and master distiller Dave Pickerell sought out a blend of various “farmstocks” for this project. The young native whiskey, added for its “fireworks and explosion of flavor” has been tamed by a blend of five and six-year rye from Canada’s Alberta Distillers, and some more traditional 12 and 13-year whiskey stock from Lawrenceburg’s MGP Distillery.

The ultimate goal of WhistlePig is to “create a true farm-to-bottle whiskey,” and this is certainly a calculated step in the right direction. By presenting a truly rye-forward whiskey in this first bottling of Farmstock, WhistlePig has embraced the spiciness of both the local grains and wood to give the world it’s first taste of its very own Vermont terroir.

Appearance: A light singed straw hue makes way for a clear yet dull appearance. Legs are impressive however, and cascade down the glass interior in slow waves.

Nose: The aromas here are deep and complex. A wave of alcohol heat leads off but soon dissipates as the palate adjusts. Emerging wafts of cinnamon stick and dark, salty caramel are present as the fusels become lost in the air. There is a pronounced red berry note as well, which adds depth and an unexpected brightness. The grain-forward nature of this whiskey also leaves an air of baking bread in my nostrils, which keeps bringing back the aforementioned toasty burnt sugar note.

Palate: While the nose gives an impression of perceived sweetness, the first wash of Farmstock over the palate accentuates the more dry aspects of this whiskey. The oak is prominent and heavy, but not quite astringent. Each sip starts with an angular roasted, husky rye siltiness that is tamed by the mild spice and calming qualities of the Vermont oak. This whiskey is both floral and dry on the tongue, prickly and aggressive as a bold rye should be. Enjoying the vanilla and caramel nose as I sip on the perfumey, earthy whiskey is a true collaborative effort resulting in a thoughtful sipping dram. As my tastebuds acclimate, more obscure notes of peanut butter and black peppercorns emerge.

For an established brand like WhistlePig, it may have been a smart idea to use the first 'farm-to-bottle' liquid as a blending tool instead of a standalone release. I'd wager that the oakiness and astringency from the "triple-terroir" juice may be a bit much for the WhistlePig drinker to handle on its own. Still, this bottle is a worthwhile investment and stands alone as a piece of Vermont distilling history, as well as a fine sip of rye.