Editor’s Note: In this, the final part of our extensive three part interview with former Maker’s Mark master distiller and craft whiskey guru Dave Pickerell, we speak with him about his experiences working with a range of young whiskey makers as well as the state of craft whiskey in general.

If you haven’t read the previous parts, check out part 1 and part 2 first. Note as well this has been edited for clarity and brevity.

The Whiskey Wash (TWW): Give us an idea of some of the distilleries in the US craft world that you’ve had hands in that you can say publicly.

Dave Pickerell: Let’s see. I’ll try to run through a list. I’ll start in the northeast. The Sons of Liberty, which makes idiosyncratic malt whiskey for beer lovers. It’s like a three or four-person operation. In 2013, they won Whiskey Magazine’s Best Flavored Whiskey in the World for their pumpkin whiskey. Last year, they won North America’s Best Flavored Whiskey for their hop whiskey. I’m really proud of those guys. They’re in Narragansett, Rhode Island.

Swing back around, you get Louisiana Spirits, Bayou Rum in Louisiana. Come back up into Tennessee and we got all the moonshine guys. I’ve got Short Mountain, Ole Smoky, Popcorn Sutton, plus Corsair, Nelson’s Green Brier, and Tenn South. We’ll pop over to Rocktown at Little Rock, Arkansas. In Kentucky, I did some work in Old Pogue.

In Ohio, I’ve done some work with Watershed. In Detroit, I built Two James Distillery. Then in Chicago, I built the Chicago Distillery. I’ve done work on Few. Built Whiskey Acres and did a lot of work with the Blaum Brothers. Then in Wisconsin, Driftless Glen. Over in Minnesota, the Panthers Distillery and Far North Distillery, In Texas, Firestone and Robertson and Garrison Brothers. In Kansas, Dark Horse Distillery, J. Rieger and Co. 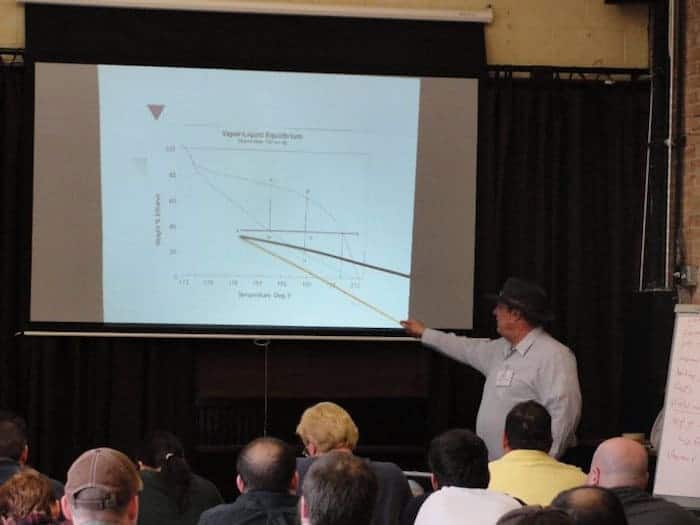 TWW: When you think about your work with distilleries in different parts of the country, can American whiskey become regional in nature?

Pickerell: Yes, and it will be.

TWW: Given that, is there more of a sense with the regional whiskey that certain styles will be defined based upon grain type within the region?

Pickerell: There are some. For instance, if you want a wheated whiskey in the west, you’re using south white wheat, while for one in the east or south, that’s south red wheat. It’s a lot easier to get rye if you’re in the colder climate because rye doesn’t grow on the south. I’ve been trying to get somebody to do some sorghum spirit. Not with a milo but with a pressed juice. It’s a little difficult because the US government doesn’t recognize it as a category so you have to do more education but it’s really good, tasty stuff.

Everybody wants to do a bourbon on a rye if they can but they’re going to be different. When I went to Hillrock, given in particular that we went with a concept of expressing terroir, the first day, first distillate batch, when it came off distilled, it tasted like cinnamon and clove. I was so excited to see the fields have announced they’re present.

At Hillrock, we’re going to know more. This last year, not this harvest but last year’s harvest, we harvested field by field and kept them all segregated. Our malt whiskeys that were made this year are field by field malt whiskeys. I don’t know if there’s going to be terroir differences between the north 40 and the south 40 but we’re going to know in a couple of years. That’s exciting for me.

TWW: One of the big debates we have in our forums are people going, “It’s not bourbon unless it’s made in Kentucky.” Do you have anything to say to those people?

TWW: So to wrap up, with the craft whiskey today, it’s certainly coming forward in leaps and bounds. Do you see any challenges? What do you see as the future for them?

Pickerell: I do think that there are going to be two washouts, and that we are in the middle of one. The one that we are in the middle of, nobody’s really going to get hurt by it, but brands are going to disappear or they’re going to have to be completely reformulated because companies didn’t have the capital to buy up enough [whiskey]. Their focus is all third party and they didn’t have the focus or the capital or the foresight to buy up enough to sustain them.

When the economy takes its next tank…the American people will start looking at their money and saying “okay – I’m buying this because it’s local but it’s $20 more a bottle than Maker’s and I’m okay with Maker’s.” When that happens, the people that haven’t got the quality behind their product [will disappear]. I’m not worried about Hillrock even though it’s $80 a bottle. I’m not worried about WhistlePig because the quality is behind it. There are a lot of products that are just kind of so-so. If they’re astute, they will be working very hard to [wow people] before the next economic downturn to protect themselves.

The Whiskey Wash thanks Dave Pickerell for the time he spent with us during this lengthy interview!