Trench Whisky And Drinking During World War I

“A bon, les whisky des tranchées; ce sont la“. The local Carrefour Contact manager shows me his treasure trove with great pride. Finding the cheap imported blends stashed away on the top shelf did not surprise me at all, but the denomination ‘trench whisky’ was new to me. Not purposely disrespectful I guess but definitely awkward in these last months of the 2018 World War One commemorations that lead up to the centenary this past November.

During The Great War booze played a major part in every soldier’s life. It was a necessity for the military high command to hand out alcohol rations at a large scale. Therefore alcoholic beverages were more than a Saturday night treat, it was meant to reduce all kinds of frontier battle fears from shell shock to serious wounds, to hypothermia and even to the deadly Spanish flu. It was reported that many soldiers – both British Tommies as well as the French poilus– were not only treated to, but also treated with, rum. And generating Dutch courage (a gin term) was often the case. 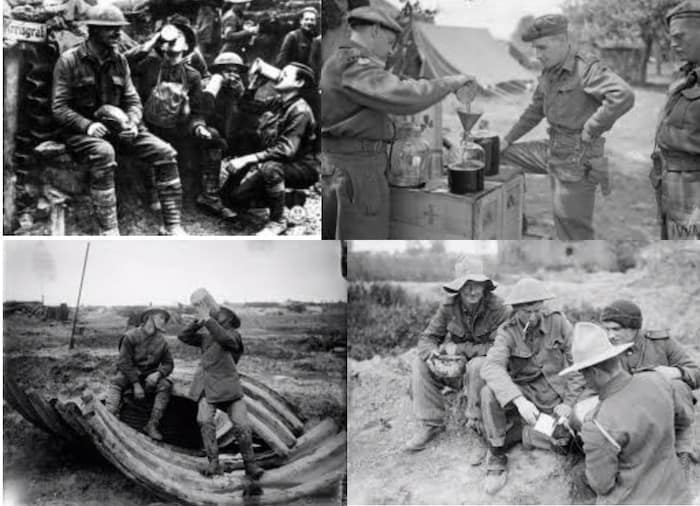 In theory soldiers were promised to be in the trenches for only one week, but in practice this period could be extended to several weeks when the fighting was tough. The ration of rum or whisky for every front soldier was two times 7 cl a week, whereas a resting soldier got half the amount.

The beverages provided from the army command were beer, rum, gin and whisky. Especially the ‘barbed wire whiskies’ were rolled out by the barrel. Whiskies like Old Orkney and 9th Hole and later Johnnie Walker were popular among the troops. The Musée de la Grande Guerrein Péronne (Somme area) has some interesting artifacts on display in this respect. The most mysterious whisky bottle is undoubtedly from a still unknown distributor: Old Scotch by McKechnie’s.

The rum handed out was dangerous stuff too. It was not only 80% abv at the beginning of war, but the later weaker version of it was used to dilute the everyday water rations, because rats and dead bodies had infected the water available. Extra rations were handed on top of that after another full attack at the enemy lines. Death men’s rations were welcomed as ‘a bonus’ and often used to give the surviving men a good night’s sleep.

It is a fact that the French still are the number 1 whisky drinkers in the world. They outdo the Irish, The Scots and the Americans in this alcoholic rat race to the top. It is not the wine consumption that made them great the last few years. No, it is the water of life that seems to have taken possession of their French veins. 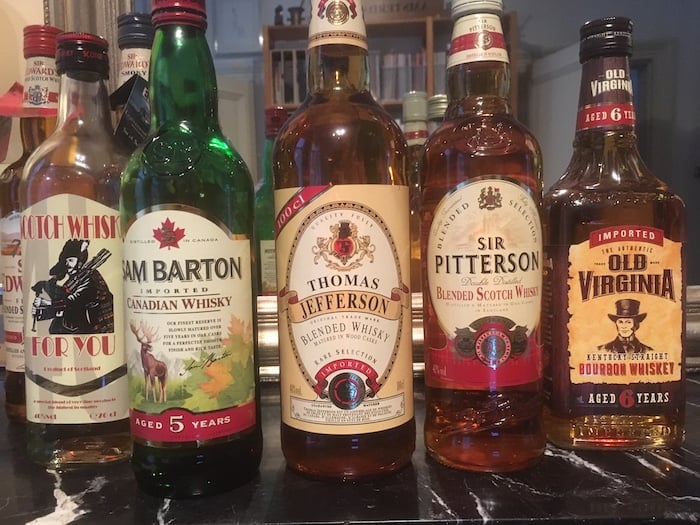 Is it because present day French super markets still have the cheaper whiskies on display? And is this the way to please every citoyen ordinaire? For sure, French based Pernod Ricard knows how to shelve the finer whiskies like The Glenlivet, Chivas Regal, Ballentine’s in most of the French supermarchés. But, I still cannot believe how this preoccupation for the cheaper stuff is in line with the French fine taste of haute cuisine and fine table manners. To find out for myself I drive out to buy me a few bottles.

They are all there: Sam Barton from Canada; Sir Pitterson and Scotch Whisky For You from Scotland; Old Virginia from Kentucky (USA); and Thomas Jefferson from  somewhere I don’t know – just to name a few. A wonderful line-up on my gîtes–de–Francekitchen table for a total of 48 euros. The stag on the Sam Barton bottle reminds me of the impressive statue at the Newfoundland Memorial Park just south of the hamlet of Beaumont-Hamel. Both nose and taste are sweet, neither depth nor finish. A whisky I will easily forget. Old Virginia is branded as bourbon and has the typical corn sweetness. What else is there that might interest me ? I don’t want to spoil my evening so I keep the other three for tomorrow.

Phew, there’s a lot of whisky ground to cover before I dare to go back to my local Carrefour manager and give him my honest opinion. I do not think that will happen, though. Well, yes, I might tell him about my wonderful glass of Merlot. Santé.